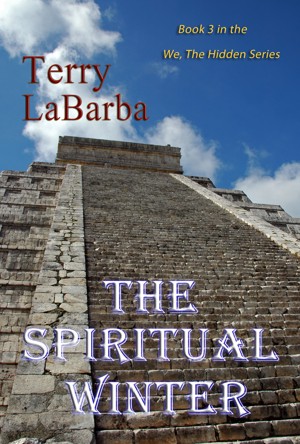 By Terry LaBarba
Time is accelerating on Earth and the leader of a powerful intelligence agency travels to the Yucatan to investigate Mayan clues. Through fortuitous meetings and mystical events he assembles the puzzling plan of humanity. More
Tolan Nichols can see that the predicted earth changes are in fact a reality. He delves into the mysteries of the Mayan Calendar with a trip to the Yucatan Peninsula to make sense of the newfound scientific data that time is accelerating. He sees us rushing toward a destiny —but to what end, or is it a beginning? Being left with the end of an age knowledge from the Ancient, he must write words of comfort to transmute the fear of the masses. The world depends on it. But what makes his world go ‘round with his Love deep beneath the snowy peak of Mt. Shasta? Having lost contact with the master, he discovers an unexpected and powerful ally who shows him what he’s really made of.

Benson Palmer’s daughter, Abigail, is eighteen now and claiming her independence from him by leaving I.N.’s headquarters with the handsome new chauffeur. Unaware that a bonding ceremony at birth has tied her to a five-hundred year old Lemurian man who believes she is his reincarnated wife, she finds herself in the middle of global power players and the truth of her origin.

Shamaness Corina sees the signs of her mortality and plans to hold on to J’Alor, her man throughout the ages, but will his promise to her change their fate or the secrets of their past deeds?

In this third novel of the series, many of the tale’s questions are answered and leaves you with new knowledge to process —your own part in humanity’s story.

Terry LaBarba learned she could entertain through creative writing when she was a sixth grader and her class gave a round of applause after she read aloud a humorous story that she put together using the twenty spelling words for the week. Much later, with a creative streak unleashed, she wrote screenplays around premises she would like to see on screen with her favorite actors. The scripts became novels and her studies became metaphysical, always interested in new methods for healing the mind, body and spirit.

With intuitive skills and a quest for better healing results, she left her training in the medical field for energy medicine and the ancient, shamanic practice of Huna.

The search for health and well being brought her back to creative writing, where she shares what she’s learned within her fiction. Terry practices hypnosis, reiki and various Hawaiian, shamanic skills.

Born and reared in Texas, Terry now lives in Dallas, Texas, where she is currently working on her fourth book of the We, The Hidden series. Understanding the potential of inspired fiction, not only does she want to entertain with her writing, she plans to reveal.

You have subscribed to alerts for Terry LaBarba.

You have been added to Terry LaBarba's favorite list.

You can also sign-up to receive email notifications whenever Terry LaBarba releases a new book.