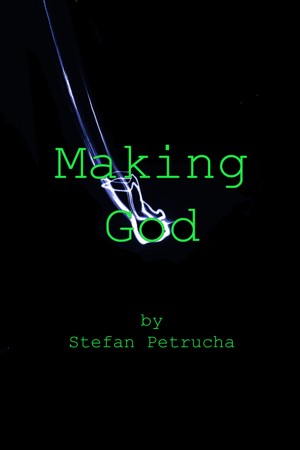 In it, The Great Work, a potent conjunction of genius, schizophrenia and egomania finds its way to the mass culture through a manuscript lost by a brilliant and unlucky recluse. It's found in the trash by an insane street woman, marketed by a megalomaniacal Master of the Universe and soon on its way to becoming the center of a new religious movement.

Born in the Bronx, Stefan Petrucha spent his formative years moving between the big city and the suburbs, both of which made him prefer escapism.

A fan of comic books, science fiction and horror since learning to read, in high school and college he added a love for all sorts of literary work, eventually learning that the very best fiction always brings you back to reality, so, really, there's no way out.

An obsessive compulsion to create his own stories began at age ten and has since taken many forms, including novels, comics and video productions. At times, the need to pay the bills made him a tech writer, an educational writer, a public relations writer and an editor for trade journals, but fiction, in all its forms, has always been his passion. Every year he's made a living at that, he counts a lucky one. Fortunately, there've been many

The first part of the book is character development, In my personal taste (others may differ) it was to much to soon.

The rest of the book was an interesting perspective on religion in story format. Neither really good or really bad. This is more of an exploratory trip on religious theology that I have not come across before. I did read the whole thing (text to speech while commuting).

You have subscribed to alerts for Stefan Petrucha.

You have been added to Stefan Petrucha's favorite list.

You can also sign-up to receive email notifications whenever Stefan Petrucha releases a new book.