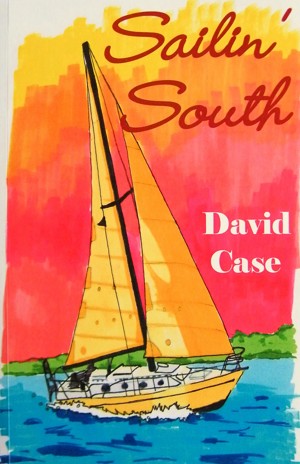 By Dave Case
With sextant, sumlog, and a lot of luck the author and his wife set sail in quark, the 29’ sloop they built from a hull-and-deck to chase the sun. There was plenty of fun and excitement as King Neptune toyed with little quark. A few life-long friendships were forged along the 14,000 mile odyssey. Columbus was right; the earth is round. More
In the fall of 1979, Vickie and Dave Case set out from San Francisco in a 29’sailboat built from a semi-kit. They harbor hopped down the coast to Manzanillo, Mexico before bravely heading the 2700 miles over open ocean to the Marquesas. Using a compass, sextant, and sumlog they covered the distance in twenty-two days. Then it was off to Tahiti, and the Society Islands, Rarotonga, Pago Pago, before heading back by way of Honolulu and home to San Francisco. This was voyaging in the tradition of Joshua Slocom; no GPS, long-range radios, refrigerators or air conditioners. The journey was as God intended; a fair breeze, a star to guide, and a bit of luck to tide us. Very primitive by today’s standards, mechanical problems and weather were nevertheless a constant challenge. It was the people met along the way that made it all more than worthwhile.

I learned to sail on Alamitos Bay at eight years. It wasn't until I reached age sixteen that I solo's in an airplane. My family was rich in culture, poor in money; no matter, Mother said I could be anything - do anything - I wanted. That gave a lot of confidence to a sickly kid with asthma.

As a result I flew for forty-four years; everything from biplanes to the huge DC-10 that carried 350 passengers. There were revolutions in the Congo, wars in Laos, Vietnam, and Desert Storm I participated in as a pilot. Good times - bad times - it has all been the stuff of legend. Sometimes scared out of my wits; other times having more fun than the law allowed - seldom bored.

Then there was the sailing. Little boats, big boats, around the bay, across the ocean with the same sense of excitement and adventure that I experienced with flying. Amazingly my China-born wife was at my side as we crossed to Tahiti in Quark, the 29' boat I built. (Something worked; we've been married forty-four years this June.)

With the airlines a pilot must retire at age sixty. Since I quaified for a marine captain's license, I changed hats and began a whole new career delivering yachts up and down the Coast between Canada and Mexico. This continued for ten years until the writing bug insisted I put down some of my experiences for others to share.

And that, ladies and gentlemen is how I've come to write Sailin' South, Maverick Pilot, volumes I, II, & III, and soon to be finished, my first fiction novel, Keeper of the Secrets - an MIA Laos yarn.

You have subscribed to alerts for Dave Case.

You have been added to Dave Case's favorite list.

You can also sign-up to receive email notifications whenever Dave Case releases a new book.