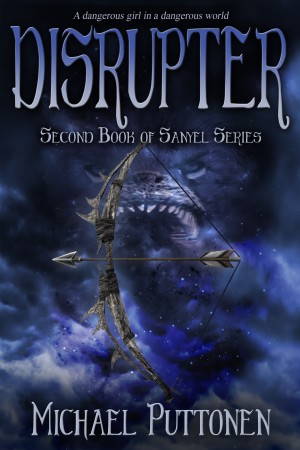 By Michael Puttonen
Owning a keen wit and intelligence, an ability to control animals, and following a life path unusual for a female in her male-dominated culture, sixteen-year-old Sanyel is building a reputation in her small corner of the world as a formidable adversary and ally.
A former foe calls this wily, often underestimated female shaman "the Disrupter." The belligerent Cruxun will soon find out why. More
When Borsar, the murderous priest, arrives to ask Sanyel for help in rescuing his son from a madwoman's cult, she has every reason to be wary. Her former foe says he has changed, and claims that Sanyel herself set him upon his current humble path. No one believes the fat priest, and for good reason; his past is a bloody one. Despite her doubts, Sanyel agrees to assist the man, but complications arise.
A detour to the far side of the mountains through a mysterious tunnel leads to unexpected peril in the land of the Cruxun, a belligerent people who enslave or kill all outsiders. Borsar proves a valuable and surprising companion as Sanyel and friends seek a way out of their dilemma. Assisting them is the advantageous knowledge that Sanyel resembles a legendary figure from Cruxun history. A surprise awaits their group when the mysterious tunnel, a remnant of an advanced culture from the distant past, reveals its hidden purpose.
Available ebook formats: epub mobi pdf lrf pdb txt html
First 20% Sample: epub mobi (Kindle) lrf more Online Reader
pdb
Price: $2.99 USD
Buy Add to Library Give as a Gift
How gifting works
Create Widget
Tags: shaman warrior hunter heroic fantasy action hero ancient mysteries deadly virus unusual powers adventure hero vanished civilization
About Michael Puttonen

Michael Puttonen is a Minnesota native and writer of action/adventure novels with a touch of fantasy. He honed his craft writing short stories before expanding into writing full-length adventure novels. Always an avid reader, his tastes include an eclectic variety of genres and styles that encompass storytellers both past and present. As a writer, he feels an affinity for action and adventure and loves fantasy for the freedom it offers in creating alternate worlds. His direct influences include the pulp fantasy of E.R. Burroughs and the historical fiction of Bernard Cornwell. His SANYEL series features the adventures of a young, gifted female shaman as she confronts a male-dominated world. This ongoing series currently includes the books SANYEL, DISRUPTER, CIRCLES AND STONES, and BONES OF THE GODS.

Reviews of Disrupter by Michael Puttonen

You have subscribed to alerts for Michael Puttonen.

You have been added to Michael Puttonen's favorite list.

You can also sign-up to receive email notifications whenever Michael Puttonen releases a new book.