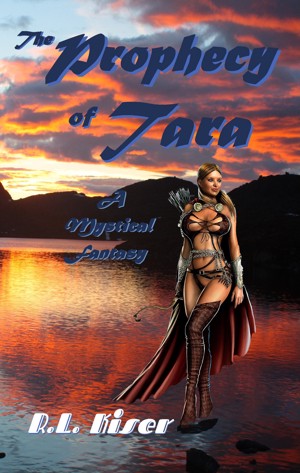 The Prophecy of Tara

By R.L. Kiser
Rated 4.00/5 based on 1 reviews
An ancient Power, corrupted nobles, a vibrant young warrior woman and a monumental task against insurmountable odds. More
· Eons ago a great power arose to corrupt the world. It could not be destroyed by armies and so was split into pieces and scattered by a powerful sect of monks. Now it has arisen again, as foretold in a prophecy, and corrupted a powerful northern family. The monks cannot interfere so they've trained from childhood and tasked Tara, a vibrant young woman with special abilities to take special knowledge across hostile land to a wizard in the west.
· Now flowering into womanhood she is strong, sexy, without guile, and possessed of martial fighting abilities beyond those of most men. And she is outgrowing her scanty lizardskin armor, which reveals a little too much. Her journey is filled with peril.
· She is joined by a disparate group, a stranded star traveler with a laser sword, a noble giant from the north, an ancient warrior from the time before, and others. There are powerful forces that would see to her undoing, including an invincible Shadow Dancer.
· This is the story of her intriguing journey and encounter with some of the most interesting and dangerous people on the planet.

The Prophecy of Tara is a story of prophecy, epic battles and magic. Tara was raised by monks and has trained her entire life in preparation for her role in an ancient prophecy. Protected by lizard skin armor (magical in nature) and by her superior warrior skills, she still discovers she cannot complete her quest alone.

As luck may have it, she attracts attention and assistance from several equally yet diversely skilled people along the way: Reed, a spaceman with a laser sword; Luggo, a northern warrior giant; Steph, a burly blacksmith with a secret; and Tianna, a roguish magician's assistant. The wizard Duphrene and his involuntarily shapeshifting companion Sistera eagerly await the arrival of Tara but are unable to assist for fear of interfering with the prophecy.

Besides the heroes, the villains are equally memorable and at times despicable. The evil power is formless in itself, but hides and grows in power within the hearts of a family. They send agents and mercenaries to intercept and destroy Tara and her companions, lending Tara's journey the feel of a constant battle for survival, though the various fights aren't necessary connected. As in other R.L. Kiser books, not all of the villains are what they seem. It's always interesting to see how things play out.

My only caution is that this book should be limited to adult readers due to some seriously explicit passages reminiscent of the depredations of the Mord Sith in Terry Goodkind's Sword of Truth series. The battles are also graphically described and gory.

Overall, I really liked this book, though I can only make it through one or two battle scenes in a single sitting (probably why it took me a while to read the story). The characters are charismatic and their banter is humorous. I enjoyed the magical elements and the hints at a greater history.

I recommend this book to adult fantasy lovers who don't mind quite a bit of battle gore and some sexually explicit content.

I received a free copy of this book in return for an honest, non-reciprocal review.