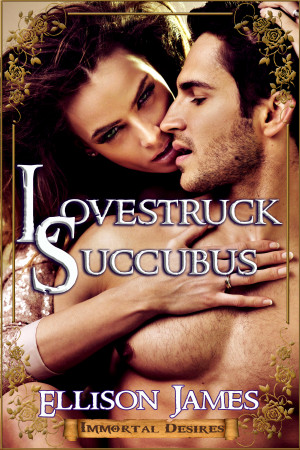 Rated 4.50/5 based on 8 reviews
Azra just wants a loving relationship, But her kind of love kills. Ousted from her world. Pursued by a Police Detective for crimes against men, her prospects of mortal love look bleak. That is, until she finds the one man strong enough to survive her. But he's the one chasing her, and he harbors a dark secret of his own. Can they survive each other or will their secrets destroy them both?

Ellison James crafts stories of fantasy, urban fantasy, erotica, and everything in between. Born in the Northwestern part of the United States, now living in the Southeast, Ellison James uses a lifetime of living throughout the world as backdrops for stories that usually start in the real world, and then make a quick departure into believable worlds of the fantastic.

"I like to play with perceptions, stretch the boundaries of believability by making Monsters, Demons, Elfs and Faeries seem like normal everyday folks that just happen to do extraordinary things."

Lovestruck Succubus - book trailer
This is my new video trailer. Now updated in HD. Please comment and pass it along if you feel so inclined.

This was one of the first books i read by ellison and i must say i thoughly enjoyed it. The world created is like nothing I've ever read before and it didnt take me long to get sucked into the book, i would defiantly recommend this book. Ellison your great !! Xx

(reviewed 6 months after purchase)
Luarara Shante reviewed on on March 28, 2012

I really enjoyed the book but the ending left more to be desired. Plus, you're left with questions. Such as why Ratif didn't get the other werewolves to help him? Why did he prefer to do it alone?

I would best describe this work as a romantic supernatural crime drama, and an excellent introduction to the characters and worlds within this story.
If you purchase this work, you should be aware that it is the first in a series of stores that this author is planned to release, the next book in the series being called Demon Among Wolves, the release date, as yet, is unknown.
The story revolves around a Succubus named Azra who has a rather large problem. She is told by her kind that she cannot find love as it is not for beings like them, but she continues to try and find that love regardless of the pain and suffering she inflicts upon herself.
Azra makes her home on the mortal world in Atlanta Georgia, and spends as much time as she can there. However, her search for love has meant that she has left a trail of bodies in the city behind her. As a result she is made to face judgement in front of a tribunal of demons that sentence her to remain there, her needs slowly breaking down her will. At the same time, a detective named Raif Lungren is investigating the deaths.
Azra makes some errors in judgement that bring her and Raif face to face. They are attracted to each other and through that attraction, Azra learns Raif’s secret, and that secret comes to threaten both of their lives.
That’s all I am going to reveal about the story in this review, I think that the above summarizes the main character’s situation well.
I found the writing quite good, the drama wasn’t over the top, and the plot followed along well from place to place. I like the use of Atlanta in the story, the descriptions of places were well done and I felt like the author knew the places well.
Arza is an interesting example of a Succubus, she has a demonic form that isn’t all human, but has a human side that fits well for her as a mortal. I found the use of her Succubus powers when she was with Raif quite original. I didn’t expect the changes when they came and the confusion on both sides, Arza and Raif, was an interesting layer placed on them both.
There is a “baddy” in the work named Tarmin, who is very evil as you would expect any demon to be. But I was less impressed with him than I was with Tatianna, a lesser being in the demon planes that I think is just fascinating. Not just in what she did in this work, but what she could become in the future stories to come.
The story did leave many questions unresolved, as I would expect the first story in a series to do, but that didn’t bother my enjoyment of the story as a whole. I thought the work was well polished, that the world was well constructed, and that I found that I cared about the characters.
I’m going to give this work 4 pitchforks out of five.
I would have liked a bit more about characters such as Tatianna to round out the story, as there were many questions about her and the other members of the Demon Council that were unanswered in this story. But there will be another chapter in the story to be told and I await that with a swisch in my tail…

(reviewed 2 years after purchase)
Nickie Nicole reviewed on on July 29, 2011
(no rating)
Enjoyable read. Started off slow but quickly picked up the pace.

Well thought out and well developed! Very deep characters that make you work to understand them, and reward you greatly for your efforts! Ellison is wonderful!

This book is different than the title suggests. It starts with the problems of a succubus. From there, the plot development keeps moving in unexpected directions making this an interesting urban fantasy type read.

Wonderfully written. Had a hard time putting it down once I started reading. Easy to read and follow

Ok, I admit, when I 1st started the book and read the 1st few chapters I almost stopped reading it. It seemed like the "life force" plot was going to go on forever. Then, all of a sudden you learn what all that was about! The author had to include all that in order to make the reader understand what what was coming and why. And boy did he ever! What a surprise and well written story!

Although there is a lot of erotica in the beginning of the book, you soon realize the sex isn't there just for the sex. It's a type of erotica like I've never read before and having a hard time explaining, even now! One soon realizes this is not just another sifi erotica. Once you get into the story, you'll not want to put it down!

Ellison James develops a very good sifi/erotica/romance/mystery/detective story that I highly recommend! It's all those books rolled into one, interweaving two worlds together with their own compelling characters playing their part.

Start the book, give the story a chance to develop, then hang on! Two thumbs up for this 1st book by Ellison James!

Ellison James does a wonderful job of pulling the reader into his story, right from the start. My intention was to read this in bits, when I had the time, but once I started I couldn't stop! I finally had to force myself to go to bed, and then I finished first thing the next day.

I was impressed by James descriptive style, his compelling characters, and his ability to lead me through through the scenes and the story as though I had no choice but to continue reading!

Throughout Azra'a struggle with her own deadly needs, I continued to root for her, willing her to learn what she must to find the love she craved.

Just when I thought I had Detective Raif Lungren figured out (which I like to think I'm pretty good at), James threw me for a loop and had me back-peddling to see how I had missed it. I love it when a storyteller tricks me, the reader who thinks she is always two steps ahead!

You have subscribed to alerts for Ellison James.

You have been added to Ellison James's favorite list.

You can also sign-up to receive email notifications whenever Ellison James releases a new book.