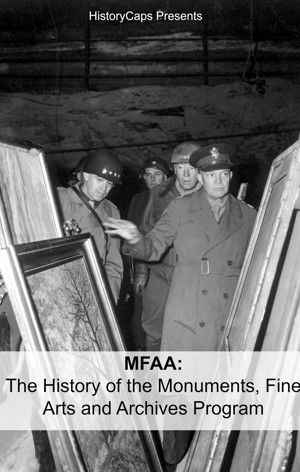 MFAA: The History of the Monuments, Fine Arts and Archives Program (Also Known as Monuments Men)

A group of art historians, museum curators, scholars, and others with an expertise in art accepted the enormous responsibility of traveling to the front lines of World War II in an effort to protect art before it could be stolen or recover the art that fell into the hands of the Nazis. Even more lent their expertise when the fighting ended, remaining in Europe for years after the war was over. They were called “Venus fixers” by the troops but have since come to be known as the Monuments Men.

Acting on orders from General Dwight D. Eisenhower, who had the backing of President Franklin D. Roosevelt, many of the Monuments Men – and women – put their lives on the line for art. By doing so, they preserved not just paintings, sculptures, and tapestries, but a significant portion of the culture that makes life worth living. As Mikhail Piotrovsky, the director of the State Hermitage Museum in Russia, said, “Art belongs to humanity. Art is what makes us human.”

This book dives into the fascinating history of one of the greatest treasure hunts of all time!

HistoryCaps is an imprint of BookCaps Study Guides. With each book, a brief period of history is recapped. We publish a wide array of topics (from baseball and music to science and philosophy), so check our growing catalogue regularly to see our newest books.

You have subscribed to alerts for HistoryCaps.

You can also sign-up to receive email notifications whenever HistoryCaps releases a new book.