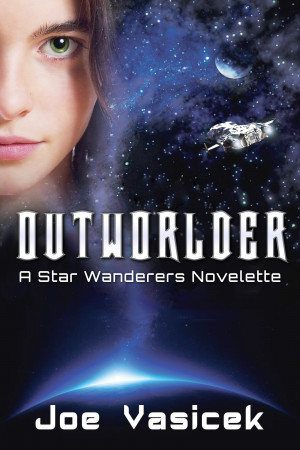 By Joe Vasicek
Rated 4.33/5 based on 6 reviews
He wanders the stars in search of a home. Instead, he got a girl without one. More
When Jeremiah arrived at Megiddo Station, all he wanted was to make some trades and resupply his starship. He never thought he'd come away with a wife.

Before he knows it, he's back on his ship, alone with his accidental bride. Since neither of them speak the same language, he has no way to tell her that there's been a terrible mistake. And because of the deadly famine ravaging her home, there's no going back. She's entirely at his mercy, and that terrifies him more than anything.

Jeremiah isn't ready to take responsibility for anyone. He's a star wanderer, roaming the Outworld frontier in search of his fortune. Someday he'll settle down, but for now, he just wants to drop the girl off at the next port and move on.

As he soon finds out though, she has other plans.
Available ebook formats: epub mobi pdf lrf pdb html
First 20% Sample: mobi (Kindle) lrf pdb Online Reader
Price: $2.99
Free! USD
Buy with coupon Use the code JT89X at checkout to get this book for free
(Offer good through Dec. 31, 2021 )
Have a better coupon?
Add to cart, then apply your coupon
Add to Library Give as a Gift (using coupon)
Have a better coupon?
Add to cart for gifting, then apply your coupon
How gifting works
Create Widget
Tags: science fiction romance science fiction adventure science fantasy space adventure far future starship pilot accidental bride star wanderers
About Joe Vasicek

Read very nicely and shows two different young people who join together to explore and wander amongst the stars. It tell why mankind left earth , yet took things to remind of how they needed to change or die out as some had from earth! Brings to memory the book called "The Last Gasp" it's how mankind destroyed the world without realizing that it was to far gone to save the world! This book by Joe is different but it tells by legend & religion how mankind was told by God to leave it... very interesting thread that turns up at various times throughout this story! I truly enjoyed reading it!

(reviewed the day of purchase)
Dingbat Publishing reviewed on Nov. 15, 2014

A well-written sci fi novella that takes a deeper look at an outworlder's unresolved issues. Not my usual shoot-'em-up military sci fi, definitely deeper, and fascinating in the undertones of the male-female relationship that can't be advanced with words. Professionally edited, formatted, and proofed; nothing to get in the way of reading absorption. Four strong stars.

A sweet story. I plan on reading more from the author.

its short but a great read cant wait to read the othe installments.

One thing about building worlds in science fiction is that there is really no wrong way to build. It’s mostly a matter of building a believable system with some consistency that adheres to its own rules.

I have read Sholpan -by Joe Vasicek- which had an interesting take on prisoners being pressed into slavery and sexual submission- I was impressed by it and decided to give Outworlder a try. Its a short read and well worth the try.
The Outworlder story is short and sweet. It seems a bit disjointed in that we jump into the story and rely on flashbacks to bring us up to speed.

I’ll try to decipher. Some catastrophe may have taken the home-world Earth and now there are settlements far and wide that have been looking for the new Eden which will match the patches of earth they have brought with them as their model. We start with Jeremiah on the Station Megiddo- though really Jeremiah has started from Edenia; raised by his parent to the age of 18 upon which time they have given him the old star-ship Ariandne. It seems Ariandne is some sort of family heirloom given to him so that he may leave Edenia and spread his seed elsewhere.

The society of this future relies on the notion of sending the men away from home never to return so that there is a strong cross sampling of genetic material through the vast new plane of existence. In a nut shell Jeremiah is expected to find himself a wife and a new home. The problem is that he’s not really all that enthusiastic about it and even his sister, Sarah, is having a hard time letting him go. His parents are more like the mother bird, all too willing to thrust the chicks out of the nest and watch them flounder and fly.

This is how Jeremiah makes his way to Megiddo- despite warning that something is wrong in that sector and ships have not been returning- Jeremiah is looking to make some trades. To do this he’s been told he needs to dock and meet with the Station Master. With some trepidation he does so.

The reader is quick to discover that there are language troubles when traveling afar, but Station Master Korha knows just enough Outworld creole to get Jeremiah into trouble.

There seem to be some problems on the station, which are indicated as potential danger to Jeremiah. If we believe Korha, then it is these problems that have precipitated his urgency in trying to dump his entire household of five daughters into Jeremiah’s hands. Jeremiah senses some sincerity in the girls being in danger and he hesitates too long.

We’re about to learn that Ariandne is not a large vessel and as a bachelor Jeremiah has been content to keep his living quarters quite cramped. I’m not sure whether that’s a blessing here, but it does limit his choices and he ends up with what he feels is the eldest of the group. Of course with great sense of danger and threat he has to quickly retreat to his ship and cast off from the station before he can have second thoughts about what he just did.

Unsure if he’s been hastily married, yet at the same time sure that shouldn’t be the case- there are some complicated implications in the social structure of things that might bite him later if it’s so. Jeremiah tries to convince himself that he’ll find a good place to drop her off where she can make a life for herself. Mostly figuring he’s unworthy because he once promised his sister he’d never leave knowing full well he would have to go.(He figures he’s just a bad person.)

If I could tell him, I’d let him know that being in close quarters with a lovely single woman and trying to keep your distance is a losing proposition. Compound that with the language barrier. Apparently Noemi does not know any Outworld creole. This creates a tense situation and clearly keeps Jeremiah clueless about what he’s in for.

I at first felt sorry for Noemi- in many ways because Jeremiah is clueless and conflicted. But, it seems that Noemi might be a bit smarter than average.

My understanding is that there might be an installment in the series of stories that takes this from her point of view. I’m definitely going to look into the other stories to this series. Interesting almost social side step story that should engage anyone who like science fiction and social commentaries.
Sural

In the grand tradition of Heinlein, Azimov, and Bradbury, Vasicek creates a universe of flawed humanity reaching beyond this Earth. Flawed though his characters are, they are at the same time ennobled by harsh lessons learned by their forebears striving for enlightenment. The characters and situations they find themselves in depict an ideal us, an us that we *can* become if we but become a bit wiser and gentler with each other.

I enjoyed this book more than I have any science fiction in years. The characters are so very believable and the story, while a bit predictable (but most human behavior is predictable), is touching and left me with a sense of satisfection and desire to know more about Vasicek's universe.