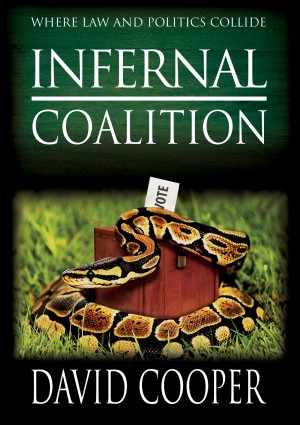 By David Cooper
Law firm partner Alex Harris finds himself on the receiving end of an elaborate scam from a once trusted client. Meanwhile his wife Susie’s political ambitions are treacherously derailed by a once welcoming party machine. Each of them strikes back, never expecting the shocking outcome as their mutual struggles against their opponents become ever more entwined. A legal/political suspense. More
When a client of law firm partner Alex Harris unexpectedly turned on him in a quest for an undeserved payment to drop a negligence claim, Alex was in no mood to take it lying down after discovering he had almost fallen for an elaborate scam. But never for one moment did he realise just how deep the plot ran and who was pulling his client’s strings.

Nor was his wife Susie any more disposed to a quiet life after her new found political ambitions were treacherously derailed. Shaking off her own disappointment, she calmly struck back at the party machine that had once seemed so eager to welcome her. And not once could she have expected the repercussions for both her and Alex as their mutual struggles against their legal and political opponents become ever more entwined, leading to a shocking outcome.

Infernal Coalition. Where law and politics collide. At their very lowest.

You have subscribed to alerts for David Cooper.