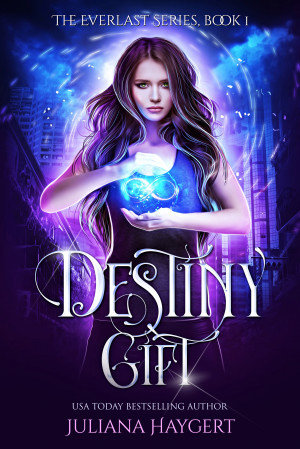 By Juliana Haygert
Rated 5.00/5 based on 1 review
Thirty years in the future, a sinister New York City exists in permanent darkness.

In 2047, the world exists in permanent darkness. Nineteen-year-old Nadine, a student at NYU, works hard to better her family’s life in the harsh conditions. When she starts having strange visions of someone named Victor, she tries to ignore the flashes, afraid she might be going insane.

But when she bumps into a very real Victor, her entire world shifts. Her visions taking a turn for the worse, Nadine is bombarded with prophecies of eerie fates, unfamiliar gods, sharp-clawed demons… and instructions. Along with the reluctant Victor, she finds her path entwined with yet another man, Micah, who may be able to shed light on her dark revelations.

Directed down an unbelievable path of magic and mayhem, the three must unravel clues from the visions in order to restore an ancient creed. The chance to bring sunlight to the world again is in Nadine’s gift, but only if the evil forces behind the darkness don’t manage to stop her first.
Download: epub
Price: Free! USD
Add to Library
Create Widget
Tags: urban fantasy destiny young adult gods demons post apocalyptic new adult
About Juliana Haygert

While Juliana Haygert dreams of being Wonder Woman, Buffy, or a blood elf shadow priest, she settles for the less exciting—but equally gratifying—life of a wife, mother, and author. She resides in North Carolina and spends her days writing about kick-ass heroines and the heroes who drive them crazy.

Hello there! So it's new for me to share public reviews of book I read, so I will try to do my best to share my point of view. I recommend to people who read reviews to make your own perception of things so feel free to read the books.

The Destiny Gift is a very interesting book. The story takes place in a rather apocalyptic future in 2047, if I remember correctly. We follow the adventures of Nadine, a young student who wants to become a doctor in New York in order to help her family and those around her. Since arriving in the city, she has strange visions that she absolutely does not understand, of people she has never met. At first it is rather pleasant to her as she meets a really caring young man with whom she exchanges some days of contact during these visions. Except that these "episodes" happen at any time of the day and Nadine just thinks she's crazy. Having very few friends, she does not dare to talk about it for fear of losing her loved ones, which is understandable. Until the day when she meets for real the young man of her visions...

The beginning of the book is rather slow to start, we are introduced to the characters and we try to understand a little more who this young man of her visions is (Victor). Other people as mysterious make their appearance, it was a little difficult to make the link to understand who was who at first, and that makes the story interesting and allows us to reflect and makes us want to read the rest of the book. I was a little destabilized by the second part when things accelerate and there is a lot of action that actually happens very quickly without really understing the triggering element . There are a lot of actions, it was sometimes a bit complex for me to understand some things, but it is mostly related to the language barrier, but I assure you it remains very understandable overall.

I quickly felt immersed in Nadine's world, as if I were with her. I easily attached myself to her character and the emotions she could feel towards the other characters. I liked the mythology brought to the story. After read the first book it was hard for me to stop so I bought the series without regret. Of course there are plots easily found, but it does not spoil the reading. I had the joy of wanting to know as much as Nadine who she really was. No disappointment.

You have subscribed to alerts for Juliana Haygert.

You have been added to Juliana Haygert's favorite list.

You can also sign-up to receive email notifications whenever Juliana Haygert releases a new book.