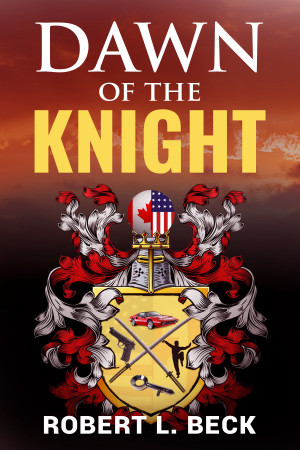 By Robert L. Beck
Rated 4.55/5 based on 20 reviews
Having been raised and trained for the past 12 years by the United States government’s former top operative has made Canadian high school senior Lance Rock the most dangerous teenager on the planet. He is forced into using his skills to protect an American woman and her two teenage daughters from the woman's ex-husband-a crime lord who has been terrorizing the family for over a decade! More
One honorable young man can make all the difference.

In this Christian-themed, thrilling and suspenseful action/romance novel, a fatherless Canadian high school boy, Lance Rock, has been raised and trained by the United States government’s former top operative. For his senior year and upon the advice of his best friend, Lance decides to travel to California in the hope of finding a girlfriend as well as freedom from his regimented life. Once there, he inadvertently ends up in the home of a mother and her two teenage daughters. He is forced to use his skills to defend them and himself from the woman’s ex-husband—a crime lord who has been terrorizing the family for over a decade! This is the first book in a series that follows the adventures of an honorable young man as he slowly comes to know God through his experiences, and eventually finds forgiveness of his sins in book four.
Download: epub mobi (Kindle) pdf more Online Reader
lrf pdb txt
Price: Free! USD
Add to Library
Create Widget
Tags: romance thriller suspense action christian teen angst teen fiction series operative martial artist teen action
About Robert L. Beck

I’m a huge fan of cool, operative/secret agent type characters having grown up watching James Bond, Derek Flint, The Wild, Wild West, The Avengers, The Man from Uncle, and more recently, Jason Bourne and Alex Rider. When I was younger, I had read a 1960’s young adult teen spy series titled, “Chris Cool/Teen Agent,” by Jack Lancer, and I loved it. That series only lasted six books and I decided that if I would ever write a book/series it would involve an “operative” type teenage character. Since I’m originally from Canada, I made the protagonist Canadian as well. Being a romantic at heart, I also knew I wanted the book to contain a romantic element as a major part of the story-line. And finally, since I myself am a Christian, I also wanted to put Lance on a spiritual journey where he eventually comes to know God and have his sins forgiven in book 4.

His continuing adventures in Faith.

Do you enjoy action/adventure movies? Do you reach for a DVD when you see names such as Steven Seagal, Sylvester Stalone, Jet Li, Jason Statham? The spiritual journeys of Lance Rock is a book series that will make you feel as though you are sitting in a movie theater. In "Dawn of the Knight," we are introduced to Lance Rock, a teenager with an extraordinary upbringing. Raised by a former US government operative, he possesses skill sets that no other teenager could dream of. Extensive knowledge of ordnance, world languages, and international politics...skilled use of firearms, martial arts, and computer technology...all while trying to socially navigate a typical California high school. Lance faces the typical teenage issues of social acceptance, young love, and discovering his place in the world. In addition, he puts his exceptional skills to use when the lives of a local family are threatened by an evil that extends beyond the US borders. Robert Beck combines the fictional life of Lance with factual representations of government agencies and international criminal organizations, The result, Dawn of the Knight," is the first leg of a journey that will leave you cheering for Lance and thirsty for his next adventure.

I read this book a couple of months ago and it was terrific. Am a fun of syfy movies and spy movies not to mention the lead character has honor, respect and dignity .
Although he is a little naive but the again who ant naive when it comes to love.
Good - no amazing story and I love the story line keeps you up until its finished
Fantastic job

I loved this book! Action packed, great characters, twists and turns. Couldn't put it down! This is a must-read.

(review of free book)
Des Bellante reviewed on Sep. 23, 2013
(no rating)
This was recommended by a friend and I enjoyed in very much, wanted a better ending but really enjoyed reading it, waiting for his next book.

Lance Rock, a Canadian teen, has been home-schooled since he was a child--but the education he has received is far from ordinary. Scott, his mentor of 12 years, is a former CIA operative. He has trained his young pupil in a broad range of subjects, such as multiple languages, computer hacking, and martial arts. But at 18, Lance is tired of his "training" and eager to live a "normal" life like his public school friends. He breaks off his training­­­--and his relationship with his mentor--to travel to a high school in California as a foreign exchange student. Here, he meets his host family, Stacy Muller, a single mother, and her two teenaged daughters, Shannon and A.J. There's also an assortment of new classmates, including Reina, a sultry female exchange student from Japan. Once lodged with the Mullers, however, he quickly comes to realize that this semester will be far from the "fun" he was seeking. His new school happens to be crawling with bullies (most of them from the football team). He also discovers that his host family is being terrorized by a group of mystery men--and Stacy, his host-mother, wants to keep their predicament under wraps! How will Lance, former homeschooled student, face up to the social protocol of public high school? And who is the gang tormenting his beloved host family? Beck's novel traces Lance's high school experience, from taking on the high school goons, to defending his host family's household from sadistic strangers.

To be honest, I really wasn't quite sure what to think about the story. I wasn't sure if the author was poking fun at the martial arts genre, or writing a serious story. Some of Lance's good-guy gestures are so grandiose as to be borderline satirical. After he frees the student body from the tyranny of the football team, the rejoicing he describes that follows is equal only to "Moses free[ing] the Hebrew slaves from Egyptian bondage..." (164). Then there's Reina, Lance's classmate, who also specializes in martial arts and affectionately refers to him as "Lance-san" and "Samurai-san." However, these complaints aside, I actually found the novel to be rather fun in a mindless, corny sort of way. So, my verdict? An entertaining read, but far from serious literature. Recommended for Ages 16-18.

Everyone has to start somewhere. It's difficult to reach a standard of writing that gives the reader an easy read, but an intriguing one. That keeps their attention, but also doesn't rattle their brain to the point of exhaustion. That delivers characters you love, characters you hate, that keep you glued to the story. "Dawn of the Knight" does not do that. I gave this every possible chance, focusing on characters, plot and story development and it doesn't reach the right standard. I hate Lance Rock as a character, and every character involved in his story, simply because they are not likeable. I felt the interactions between characters were forced, and lacking natural development. Being fluent in Mandarin Chinese, it's difficult to be excited about Rock's language abilities due to the impossibility of being an expert of all that he is. Therefore lacking credibility, I do not give this book a high review.

"Dawn of the Knight" is an exciting ride! Full of interesting characters, action, thrills, and romance, this book has it all. The story is well written and you can tell that Mr.Beck put a great amount of time and research into this novel. If you want a fun, interesting read, choose this book.

(review of free book)
Sharon reviewed on June 1, 2013
(no rating)
I am an avid reader, but rarely of fiction. I am definitely, though, looking forward to reading a sequel to this novel. Robert Beck presents a satisfying balance of action, suspense, and teen social conflict/romance. One thought kept coming to mind throughout my reading of "Dawn of the Knight" -- I would LOVE to see this made into a movie. During numerous chapters, I felt as though I was watching a "Die Hard" movie; the description of action events is second-to-none. Anyone who enjoys action/adventure/crime movies, like "The Expendables," "Taken," "Red," the Jason Bourne series, etc., will find this read to be a great ride!

I really enjoyed the book. It was not what I expected. The cliff hangers at the end of each chapter kept me wanting to keep reading. Great action, romance, and suspense throughout.

You have subscribed to alerts for Robert L. Beck.

You have been added to Robert L. Beck's favorite list.

You can also sign-up to receive email notifications whenever Robert L. Beck releases a new book.