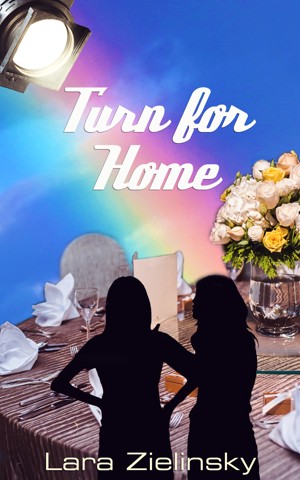 Falling in love wasn’t easy.
Staying together may be impossible.

In this sequel to Turning Point, as her divorce proceeds, Brenna Lanigan struggles with her sons’ cold shoulders and opposition to her intimate relationship with Cassidy Hyland. More
2010 Rainbow Award Winner: Lesbian Contemporary

Falling in love wasn’t easy.
Staying together may be impossible.

In this sequel to Turning Point, as her divorce proceeds, Brenna Lanigan struggles with her sons’ cold shoulders and opposition to her intimate relationship with Cassidy Hyland. Cassidy’s son Ryan eagerly accepts their relationship, making Thomas and James’ lack of support even more upsetting. When the women return from holiday hiatus to resume shooting on “Time Trails,” they sneak precious moments of intimacy in shadows and trailers. As many in the cast and crew openly show support, Cassidy and Brenna try to date. The paparazzi give chase. When the romance is publicized, the revelation sets off Cassidy’s ex-husband. Mitch Hyland will take his son from the lesbian couple…

Writing was a constant in Lara’s life from an early age and she seemed gifted at little else, being rather awkward and clumsy at almost everything. But a degree in literature wasn’t “practical” so she studied and apprenticed, and put her name… oh, wait, no, that’s someone else. (if you recognize that run-line, you will know the very first series I ever wrote fanfiction for, at the tender age of 14)

Anyway, after college training and venturing around the private sector doing “practical” things as a journalist, technical writer, systems analyst, and documentation specialist, she finally hit upon the realization that she ought to be trying to make a living doing something she really loved: writing fiction. As a hobbyist, she wrote short stories and fanfiction but then decided she needed a “real” writing course. The professor, writing unseen, declared she’d probably not do too well. She still prizes the workshop copy of her short story where he wrote in the margin: “This is brilliant. I’m sorry about what I said. You are a real writer. Publish already.”

Her first novel, Turning Point, received the 2007 Lesbian Fiction Readers Choice Award. She was also a finalist for the 2008 Debut Author award from the Golden Crown Literary Society. She has sold short stories to several anthologies, and reviews and articles have appeared in several LGBTQ newsletters. Her second novel, Turn for Home, was first published in 2010. For several years her inner journalist got a rebirth hosting a writer interview program on Blogtalkradio. She has worked as an editor for several publishers and continues to write while teaching. She lives in Florida with her family.

Reviews of Turn for Home by Lara Zielinsky

You have subscribed to alerts for Lara Zielinsky.

You have been added to Lara Zielinsky's favorite list.

You can also sign-up to receive email notifications whenever Lara Zielinsky releases a new book.