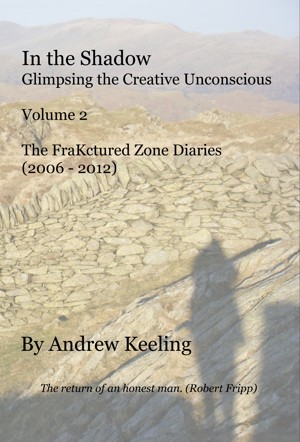 By Andrew Keeling
How do composers compose? And why? Andrew Keeling's diaries at The FraKctured Zone offer insight into the secret mechanics that power the creative process by disclosing the intellectual concerns, emotional impulses and habitual actions that constitute the daily grind of a composer-musician in the 21st Century and reveal how the harmonies, counterpoint and rhythms of life fuel the creative act. More
How do composers compose? And why?

Andrew Keeling's online diaries at The FraKctured Zone offer insight into the secret mechanics that power the creative process by disclosing the intellectual concerns, emotional impulses and habitual actions that constitute the daily grind of a composer-musician in the 21st Century. Besides demonstrating the minutiae of the creative process, also included are essays on songwriting and improvisation, reflections on the Lake District and Carl Jung and two Guitar Craft diaries.

Andrew Keeling is a composer, musician, improviser, arranger, teacher and writer who lives in the North West of the UK. His music has been performed and broadcast by many leading musicians and released on several record labels. It has also been published by Faber and PRB. He has written three musical guides to the work of King Crimson and has orchestrated the Soundscapes of Robert Fripp which have appeared on the DGM/Panegyric CD 'The Wine of Silence' received to widespread critical acclaim.

Andrew Keeling's diaries reveal how the harmonies, counterpoint and rhythms of life fuel the creative act.