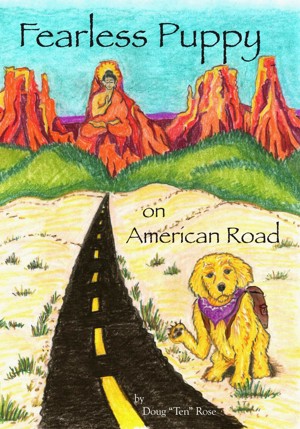 Rated 4.00/5 based on 1 review
Fearlessness begins with our 15 year old author hitchhiking away from a drug-dealing adolescence in Brooklyn. True stories from Doug "Ten" Rose's 35 years on the road, encountering heavenly Hell's Angels, oxygen orgasms, transcendent Buddhist wisdom, lesbian musicians playing a rock concert for the deaf, martial artists battling Neo-Nazis, a modern-day Robin Hood, and other memorable happenings. More
Travel through Fearless Puppy on American Road with our 15 year old hitchhiking runaway as he escapes a life of drug dealing in Brooklyn. This trip offers solid clues about how to leave excess fears in the dust. Follow the author's outrageous voyage through every stupid mistake (and most of the saving grace) that humanity has to offer. Laugh at our intrepid lunatic's ability to land on his feet in spite of himself.

Why would a 15 year old boy with a New York City native’s knowledge of transportation systems shun both public and private transport and opt to spend the next 35 years hitchhiking throughout North America? Why would anyone bypass the relative ease and safety of bus, train, or a car of his own and open himself to all manner of possible disaster by braving the whims of fate and the moods of passersby? In his words: “I’ll tell you why. I have attended 8 different colleges and universities. I’ve learned more in other people’s cars.”

“Once you accept the universe as being something expanding into an infinite nothing which is something, wearing stripes with plaid is easy.” - Albert Einstein.

Doug “Ten” Rose has metaphorically worn stripes and plaid all his life. He has thirty years experience raising funds for various causes under some very adverse personal circumstances. He has invented and directed charity projects involving rock stars, pro sports teams, governors, and senators. These projects raised awareness and large sums of money for others, often while Ten remained homeless himself and panhandled for food money in the streets (details at http://www.fearlesspuppy.org).

Ten has recently written Fearless Puppy on American Road and Reincarnation Through Common Sense. True to form, ALL author profits from these books will be donated to sponsor Wisdom Professionals (beginning with but not exclusive to Tibetan Nuns and Monks).

Ten has degrees in Comparative Religion and the survival of heroin addiction. He is also the graduate of thirty-five years and over a hundred thousand miles of travel without ever driving a car, or having a bank account, telephone, or a bill in his name. Ten may be the most comedic smartass as well as the wisest and most entertaining survivor of the hitchhiking adventurers that used to cover America’s highways. The term “crazy wisdom” is often used, but rarely meets its match the way it does in this author. Ten Rose and his work are a vibrant part of the present and future as well as an essential remnant of a vanishing breed.

Doug “Ten” Rose life sure has been filled with lots of adventures. It is an interesting book with an assortment of characters displaying the diversity of the American people. Ten uses his life experiences to teach many lessons. He has overcome some huge obstacles that would have conquered most people. I really liked the majority of this book. There were other parts that I wasn’t crazy about. The author can be a little overbearing in his opinions about issues, even though I usually agreed with what he was gripping about. The very beginning of the book would have be better at the end. And the reason of how he injured his neck was, “Too much information!” But those are my opinion, check it out for yourself. The book is definitely worth it!

You have subscribed to alerts for Doug &quot;Ten&quot; Rose.

You have been added to Doug &quot;Ten&quot; Rose's favorite list.

You can also sign-up to receive email notifications whenever Doug &quot;Ten&quot; Rose releases a new book.