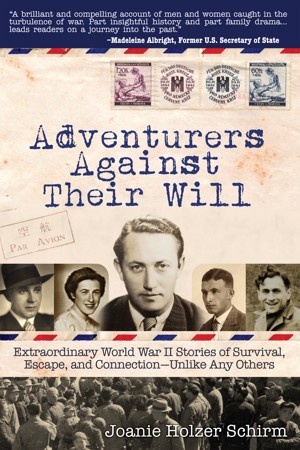 Adventurers Against Their Will: Extraordinary World War II Stories of Survival, Escape, and Connection-Unlike Any Others

Sorting through her parents belongings after their deaths, Joanie Holzer Schirm discovered an extraordinary lost world. Hand-written on faded and brittle stationary, stamped by censors, were 400 letters from 78 correspondents-along with carbon copies of the letters her Czech father had sent to them during World War II. An unforgettable story! More
"The ornately painted Chinese Boxes loomed just out of reach throughout my childhood...but my brother and sister and I paid no attention. The twin, red boxes were part of the familiar-to-the-point-of-being-invisible landscape, like that big tree outside your window with a botanical name you never learn."

Sorting through her parents belongings after their deaths, Joanie Holzer Schirm discovered an extraordinary lost world. Hand-written on faded and brittle stationary, stamped by censors and military authorities, and neatly filed in those two lacquered boxes, were 400 letters from 78 correspondents-along with carbon copies of the letters her Czech father had sent to them during World War II.

"My father never mentioned that he planned to leave a magnificent gift," Schirm tells us, a "treasure trove" in which "I would come across the very souls of his cousins and friends. Many of the secrets cloistered by those bright and shiny Chinese boxes were ghastly. Lives lost, lives shattered. Friends abandoned. Lovers betrayed. The paths I followed beyond the letters made clear that guilt and grief continued to wound and sometimes cripple those who remained, long after the war was over."

And yet the story that they ultimately add up to - a story that is as emotionally absorbing as a novel, as meticulously documented as the important work of history that it is - not one of mere survival, but inspiration.
Available ebook formats: epub
Price: $2.99 USD
Buy Add to Library Give as a Gift
How gifting works
Create Widget
Tags: memoir holocaust czechoslovakia jewish history holocaust 1930s holocaust 1940s china 1940s
About Joanie Schirm

Author of Adventurers Against Their Will - Two-time first place winner of 2013 Global EBook Awards: Best Biography and Book Trailer.
2nd book: My Dear Boy – A World War II Story of Escape, Exile, and Revelation – Potomac Books, publication early 2019 (for more information sign up at www.joanieschirm.com )
Adventurers Against Their Will is an improbable and emotional tale of a daughter’s real-life global quest to find the authors of 400 letters written to her Czech father while he was on-the-run from the Nazis during World War II.
Seven decades later, letters that traveled across four continents and were discovered by chance reveal an incomparable story about the power of friendship. Emotionally absorbing and meticulously documented, this story about unlikely adventurers is not just about survival. It is about the potential to create a better world, one letter at a time by transformative stories they reveal.

After her parents’ death in 2000, Joanie Schirm’s discovery of her Czech father’s WWII letter cache of 400 letters by 78 writers called her to become a writer. The founding president of Orlando, Florida-based Geotechnical and Environmental Consultants, retired in 2008 to work full time on what she thought would merely be transcribing her family history. As stunning revelations from the letters unfolded, Joanie knew she was given a higher calling for a worldwide audience.

“Adventurers Against Their Will is a brilliant and compelling account of men and women caught in the turbulence of war. Part insightful history and part family drama, the book leads readers on a journey into the past, answering many questions and posing new ones along the way. Joanie Schirm has made a fresh and vital contribution to our understanding of World War II’s impact on the lives of people in Central Europe.” –Madeleine Albright, Former U.S. Secretary of State

Adventurers Against Their Will puts a human face on history, highlight the importance of examining our past if we are to create a better future for mankind.
Adventurers Against Their Will available is available in English and in the Czech Language - published by Triton books in Prague. Radio interview at the time of Book Launch:
http://rebel.radio.cz/mp3/podcast/en/czech-history/adventurers-against-their-will-highlights-fate-of-people-displaced-during-wwii.mp3

A companion book, My Dear Boy – A World War II Story of Escape, Exile, and Revelation tells the story of Schirm’s Czech father’s escape from the Nazis after their occupation of his homeland. In a heartwrenching whirlwind adventure, he describes his flight across five continents, his courtship with the author’s mother in China, and a secret wish that transforms his life and will change yours. (Potomac Books, publication early 2019).

Joanie Schirm is an award-winning writer, photographer, community activist, and retired award-winning businesswoman. Joanie lectures in classrooms throughout America and Europe. Adventurers Against Their Will is recommended reading for high school students by Florida Department of Education&#39;s Just Read, Florida, the National World War II Museum, and the International Tracing Service in Germany. While President of Geotechnical and Environmental Consultants, she became internationally known for her volunteer leadership role of Orlando’s hosting of FIFA’s World Cup USA 1994. A proud parent of two adult children, Kelly and Derick, Joanie lives in Orlando with her husband, Roger Neiswender.

Reviews of Adventurers Against Their Will: Extraordinary World War II Stories of Survival, Escape, and Connection-Unlike Any Others by Joanie Schirm

You have subscribed to alerts for Joanie Schirm.

You have been added to Joanie Schirm's favorite list.

You can also sign-up to receive email notifications whenever Joanie Schirm releases a new book.