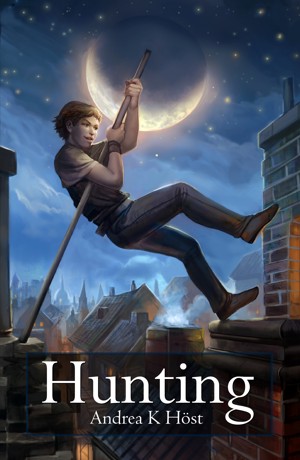 That was before the murder of Ash’s beloved guardian, Genevieve.

Now, Ash Lenthard is out for blood and even when the hunt sends her to the palace, on a collision course with a past identity she would do anything to forget, Ash cannot, will not, back down.

This isn't my favorite of Andrea K. Höst's books, but I still enjoyed it a lot. It's a fun, enjoyable read.

Hunting is a standalone young adult fantasy novel by Andrea K. Höst. Ash Lenthard is the street-smart young heroine who has disguised herself as a (slightly younger) boy and apprenticed herself to a herbalist in order to escape from an unfortunate previous life. When her guardian is murdered, she finds her desire to return to life on the streets thwarted when she is warded to the Investigator appointed by the king to look into the serial killing of herbalists. With no choice but to maintain her identity as a young boy, Ash finds herself cornered into becoming a seruilis (squire) to the foreign noble and a key part of his murder investigation.

A summary of the first couple of chapters makes Hunting sound like a bit of a fantasy version of a grim investigative procedural, and to an extent it is. The more that Ash and the nobleman, Thornaster, poke around, the more vicious and bleak the conspiracy they uncover becomes. Beneath the witty banter, romantic interplay and the flirtation with cross-dressing farce, the world of Hunting has a more nihilistic streak than most of Host's work. But she does an excellent job of keeping the action moving so that the story never threatens to wallow in its own darkness.

The author has mentioned that Hunting was written at least partly in response to her frustration with the heroines of Georgette Heyer's Regency novels, who despite their deep reserves of pluck and spirit often fall just short of being proactive. Some guy always comes along to make all their decisions for them. Ash is every bit as strong-willed as any Heyer heroine, but she's only likely to go along with a would-be white knight if it happens to suit her purposes. She's a fun character, even if she herself is not often having much fun.

I have to confess that I didn't fully understand the magical elements of the story, which are integral to the plot's resolution, but it certainly didn't keep me from enjoying them. Apart from that, it's an adventurous romp with plenty of derring-do, peril and romance, flavoured with the odd splashes of darkness to settle the froth.

This a great romp, with mystery and palace and intrigue and excellent snarky dialogue, but it's one of her earliest books (freshly rewritten admittedly) and the pacing and scene changes are off a bit and the number of neologisms threw me a bit because they didn't have as much time for me to see them in everyday use as they did in the Touchstone Trilogy - and while I appreciate the heroine falling in lust with the love interest at that point, the falling into love-realisation is just too sudden for me, especially as it's motivated by jealousy from what I gathered.

On the other hand I always want more pages from Andrea because I fall in love with her characters. And she was totally right when she said that Ash tap-dances, she totally makes me buy the incredible level of control and sheer competence Ash has, which makes her manoeuvre around everyone who tries to foil her - for good or bad reasons.

And the guys do realise that! Once she explains her reasoning and all.

What the summary doesn't tell you is that along the way Ash saves half the cast from dire straits at various points (in person's case twice!) because she can not because anyone particularly tells her to. Seriously, she even says she can't help herself it just kind of happens. A lot. (to be fair she also is laboring under a pretty intense case of regret because of Genevieve's death).

Höst says that Hunting was in response to Regency Buck by Georgette Heyer, a story about a girl searching for her brother and getting into a wild amount of scrapes (considering how well to do she was) and constantly needing rescuing. One thing Ash doesn't really need is rescuing (though on occasion she does need help rescuing herself). Ash prepares for things and within reason can estimate how things will shake down to anticipate what she needs to do.

She's not infalliable; her mistakes tend to be underestimating people and their motivations however. Ash has a lot of street smarts--she can turn a phrase so its not quite a lie and adapts to situations quickly. She understands people to a point. Ask her why her peers are hostile towards her or why Genevieve helps people the way she does and Ash will have an immediate response. However despite witnessing cruelty and evil, Ash is at a loss to understand the motivations of the killer hunting the herbalists throughout the city.

And to be perfectly truthful I was a little sketchy on the reasoning as well. A lot is made of the Rhoi (Arun)'s life being put in jeporady...probably. The mystery of who is behind some of the attack's on Arun's heir is less complicated then Höst perhaps intended. I guessed the fiend fairly quickly though whether its because I watch a lot of detective shows or because Höst choreographed this person's involvement quite loudly is anyone's guess.

The attacks are only part of the larger conspiracy and this is when the mystery begins to break down for me. When we find out the "true" culprit things become a bit dicey motivation wise. Its not until late into the game that Ash and Co. make a connection between the culprit and what's going on now. And much of that is because of something said to Thornaster. If that phrase hadn't been said I'm not sure they would have made the parallels they did.

The best part of this book was the characters. Ash is a delight--sometimes a bit too arrogant of her abilities for her own good, but its justified. She's also not above a manipulation to get what she wants, which is good since its put to use throughout the book. Her banter with Thornaster is lively and makes their eventual mutual understanding much easier to see. Ash also keeps lively company with her "Huntsmen" and has some interesting conversations with a couple peers (though I'll admit they're given a much broader stroke of detail than the Huntsmen).

Overall I enjoyed Höst's newest work. Its not quite as defined as her other worlds, but there's an intriguing mythology at its roots and Ash was simply a joy to read.