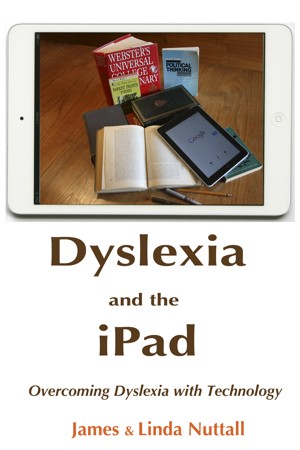 Dyslexia and the iPad—Overcoming Dyslexia with Technology

James R. Nuttall, Ph.D.
(1946- , East Lansing MI)
Dr. Nuttall worked at the State of Michigan Department of Education for 30 years. He worked in a variety of roles within the Special Education Unit. Born two months premature in Denver in 1946, he developed an eye disease associated with prematurity, retrolental fibroplasia (RLF)*, which left him legally blind. While in school he had difficulties learning to read. "On a sixth grade reading test I could read only 27 words per minute," he recalls. Most people assumed the problem was low vision. But as an adult, Dr. Nuttall visited the reading clinic at the University of Chicago and received a diagnosis of dyslexia. Dr. Nuttall received his Ph.D in psychology in 1981 from Michigan State University As a person with handicapping conditions, Dr. Nuttall has used a number of assistive technologies to learn, work, and play. In October of 2008, Dr. Nuttall was diagnosed with amyotrophic lateral sclerosis (ALS). "This has given me the opportunity to try out a variety of new assistive devices. I love technology." he says. Dr. Nuttall lives in East Lansing with his wife of 19 years, Linda, adult step-daughter Stephanie Goodwin, 5 year-old grandson Alex Joshua (AJ) and their pets, 9 cats and an Australian Shepherd named Mollie.
*now known as Retinapothy of prematurity (ROP)

You have subscribed to alerts for James Nuttall.

You have been added to James Nuttall's favorite list.

You can also sign-up to receive email notifications whenever James Nuttall releases a new book.