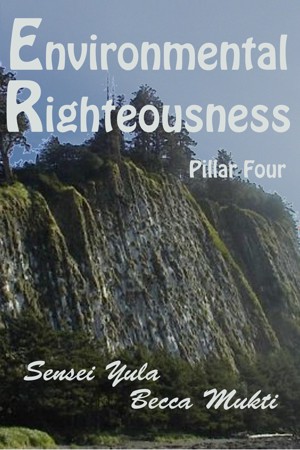 By Sensei Yula
The environment is often talked about today, but this book discusses the environment from a vantage point not taken by many. As a result, it offers a fresh perspective, and therefore solution, to the environmental chaos and destruction facing humanity and the planet. Although this book contains uncomfortable truths about our environmental reality, it is a reality we need to face. More
The first environment we as a human experience is the one that provides our home for the first 9 months of our existence, the womb. This is the first station between heaven and earth. It is the most sensitive and important environment which shapes our body-mind formation, including all of our senses of cognition and action. The second environment we experience is our outside womb environment, which also shapes our physical health but, in particular, affects the state of our mental health. Both of these environments are threatened by interior and exterior pollution as well as radiation from the eight corners of the world. This book focuses on how radiation in particular affects these two environments. It also provides steps that we can take to minimize these negative and unintended effects.

On top of the above realities, the depletion of the earth's natural resources is threatening the survival of the planet and, therefore, affecting human health as well. In addition, the climate where we live also affects our health in ways that are not commonly understood by modern science, including modern medicine. Both of these topics are explored in detail and in such a way that is not easily found in other places.
Available ebook formats: epub mobi lrf pdb html
First 10% Sample: epub mobi (Kindle) lrf more Online Reader
pdb
Price: $3.99 USD
Buy Add to Library Give as a Gift
How gifting works
Create Widget
Tags: nature environment earth environment and health electromagnetic field
About Sensei Yula

Sensei Yula has been practicing and teaching yoga, martial arts and healing arts for over 36 years. In the late eighties, he founded Centre for the Ways in Richmond Hill, Ontario. Prior to that, he ran a successful business in Halifax, Nova Scotia that included a health food cafe, several health food retail outlets and martial arts classes.

As an acupuncturist and traditional Chinese medicine practitioner, he successfully treats people with conditions including heart disease, digestive problems, lower back aches, headaches, insomnia, mental disorders, gynaecological problems, infertility, and many others.

From this experience as well as his training in Shiatsu, he has developed a system called Zen Kiatsu-Tao TCM. It is very relaxing and effective for the prevention and cure of many disorders.

To share this experience, he has co-authored The Eight Pillars of the Heaven (Volume One, 2010; Volume Two, 2013) as well as Chi Kung-Yoga Energetics for Health: A Manual for Daily Practice (2012). He is currently working on books related to his repertoire of experience in healing and martial arts.

Also in Series: The Eight Pillars of the Heaven

You have subscribed to alerts for Sensei Yula.

You have been added to Sensei Yula's favorite list.

You can also sign-up to receive email notifications whenever Sensei Yula releases a new book.