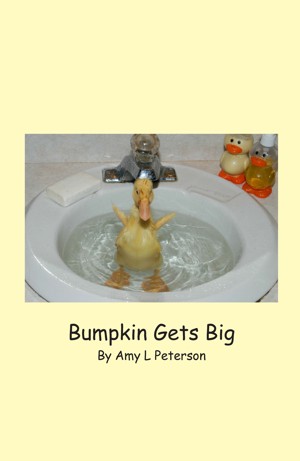 By Amy L Peterson
Rated 5.00/5 based on 2 reviews
A cute, rhyming photo book, Bumpkin Gets Big is about a domestic duckling a student found in a yard in East Lansing, Michigan. The author and her husband had taken in other critters but never a duckling. They raised Bumpkin inside their home with a cat and two dogs. This book ends with a message to parents to consider before buying a domestic duckling.

Bumpkin the Domestic Duck
Video set to music showing a domestic duckling growing up in a suburban home with two dogs and a cat and two owners that loved her dearly. Includes messages about domestic ducks, including that they cannot fly well and need safe, permanent homes when they get big. Bumpkin is featured in chapter 7 of Amy L Peterson's humorous, touching memoir, Something Furry Underfoot. 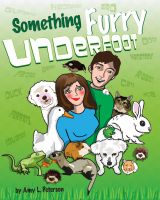 Review
Beautiful video
Review By: patsyw
I enjoyed watching this video very much. Hats off to the wonderful people involved in Bumpkin's rescue. It gave me a feeling of great pride in human nature.
Patsy Whittle reviewed on Aug. 30, 2015

What a lovely book to read to your children. I loved Bumpkin's story. The book shows us there is love and caring in this world for animals. What an amazing rescue story beautifully told through poetry. Thank you to everyone who made it possible for Bumpkin's rescue and her new life.

Here's another fun picture book--this time about a little duckling. Watching him grow up was fun--and educational. One of my favorite pictures was the underwater one with his little webbed feet. The author cautions against getting a domestic duck for a pet. People have to remember that they grow up... The author's true story of little Bumpkin and her advice make this another recommended book 'cause it's about a real pet.

You have subscribed to alerts for Amy L Peterson.