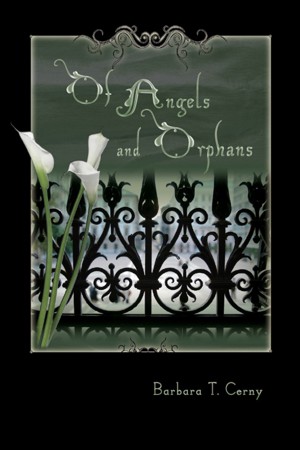 Of Angels and Orphans

Rated 5.00/5 based on 2 reviews
Audra and Nate: two lost souls that cannot find their place in the word suddenly find a place in each other’s hearts. Follow the lives of Audra and Nate as they grow from loyal childhood companions to inseparable young lovers, struggling through the perils of their own lives and facing difficult decisions that threaten to keep them apart. More
Audra Markham is a ten-year-old girl born into privilege, but only in the sense of wealth. The granddaughter of a Viscount, Audra is the object of ridicule in her spoiled and spiteful family. Alone and unloved, Audra seeks solace in the comfort of food.

In another part of London thirteen-year-old Nathaniel Abbot lives a wretched life, forced to steal food in order to survive. Living in squalid conditions at the local orphanage, Nathaniel and three of his friends are spared further suffering when Audra “rescues” them from their plight.

Barb grew up in Grand Junction, Colorado, which at that time was a small town of 30,000 people. She left that little burg to see the world, garner three college degrees, and to serve in the US Army. After eight years on active duty and fourteen years in the reserves, she retired as a lieutenant colonel in 2007. While deployed to the Middle East in 2005, Ms. Cerny finally figured out she had to get going on the real love of her life, writing. She wrote her first two novels during that time and hasn’t stopped. She is presently working on novels number seven, eight, and nine. When not writing, Ms. Cerny works as an information technology specialist and supervisor for the US Air Force. She lives with her loving husband, their two active teenagers, and three needy cats. The cats patiently watch her write and listen to her intently as she discusses plot lines with them.

Reviews of Of Angels and Orphans by Barbara T. Cerny

This was very well written. A really talented author. Loved it.

You have subscribed to Smashwords Alerts new release notifications for Barbara T. Cerny.

You have been added to Barbara T. Cerny's favorite list.

You can also sign-up to receive email notifications whenever Barbara T. Cerny releases a new book.