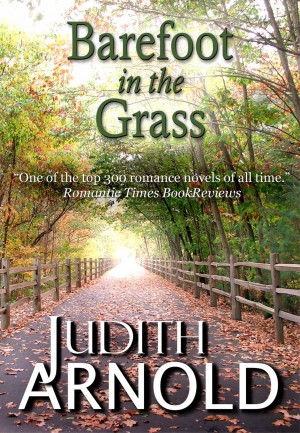 Barefoot In the Grass

Rated 5.00/5 based on 1 reviews
Originally published by Harlequin Books, Barefoot In the Grass is about a woman reclaiming her life after treatment for breast cancer and a man learning the true power of love. Named one of the 300 best romance novels of all time by RT Magazine.

"Judith Arnold gets an A+ for creating a warm and happy story about a potentially terrifying topic. My hat's off to you, Judith." --All About Romance

Judith Arnold is the award-winning, bestselling author of more than 85 novels, published by Harlequin, Silhouette, Mira, and Berkley. Married and the mother of two sons, she lives in New England.

I have loved everything I have read by this author but her books are really hard to find so I has very happy to see that she was publishing some of her older books. I got them all except this one because for some weird reason it wasn’t available on Kindle. So I waited, and waited a little more and since the book was still MIA I contacted Judith. She told me that there were some formatting issues and that it would probably be available again in about a week. Since it’s evident that I have a serious book-addiction I couldn’t wait anymore and ended up buying the PDF version from Smashwords just to realize that it was finally available on Kindle. I know this seems like a long story and too much trouble for a little novel right? Well, let me tell you that the book was worth it more that I even imagined.

The book is about Beth. Two years ago she was diagnosed with breast cancer and had a mastectomy, now she’s leaving behind a successful career in a law firm in Manhattan to move to a small town in New Hampshire. She gets a dog, a nice job as a partner in her best friend firm and a big house with an even bigger yard. She has decided to enjoy life’s small pleasures like taking naps and walking barefoot in the grass. After one of those ever present sweet situations that we often get in romance novels, she meets Ryan. There’s an instant chemistry between them but Beth is too insecure about her body to freely engage in a relationship with him. The whole book is about their relationship, about ups and downs and about overcoming insecurities and adversities, about finding strength in love to be a better person (and this goes for Beth, but also for Ryan).

At a simple glance this looked like a typical story where the heroine is scarred and feels ugly and unlovable, and then the hunky hero comes charging and tells her he loves her, and that he finds her beautiful, and that he doesn’t care about the cancer or the mastectomy, and she feels gorgeous for the first time in years, and then they live happily ever after. Well, you can forget about it because this story was nowhere near that. This is the first romance novel I have read that deals with breast cancer, and it’s the first romance novel where the leads actually react and behave like normal people. There is no magic solution to their issues, there’s no “I’ll kiss it and make it better”, there’s none of that. Instead we get real people (maybe a bit hunkier than in reality) who deal with things how I imagine a regular person would. They get scared, they think about it, then they get scared some more. They feel insecure, they feel pain, they feel terror, they try to move on and they fight against the bad things that happen and don’t let it destroy them.

I said that the book was about Beth but it was also about Ryan. This was a fantastic hero. My favorite part about this book was the big reveal. There’s a lot of build-up towards that moment and when it comes, it doesn’t disappoint. I don’t want to give anything away but if you read the book you need to prepare yourself because Ryan might seem like your typical hero but he isn’t. He reacts like I imagine most of the people would. And I loved him for it, he was refreshingly honest, and even though some parts of the book were painful to read and absolutely heart wrenching, it just made the happily ever after even sweeter.

Beth was inspiring. She was strong but she also had her weak moments. She allowed herself to indulge in the occasional pity-party, but she knew that the only way out was fighting. I liked her very much and I was rooting for her the whole time. I admit that sometimes her self-doubt was a bit annoying mostly because she kept reciting how insecure she felt, but I also understood where she was coming from.

This book wasn’t all gloom and doom and unbearable angst (even if my review leads you to believe it is). It had its light moments and I think they were well balanced between the more dramatic ones. The cast of secondary characters was good, even if the story doesn’t focus on them that much, and the dog was adorable.

It was a great uplifting story about overcoming adversity and finding love, with a couple of unforgettable leads and some topics that aren’t normally dealt with in romance novels. If you are a fan of contemporary romance and enjoy books full of emotion then I think you should read this one. And yes, I got the book, read it and wrote the review in the same day, that’s how much I liked it.

You have subscribed to alerts for Judith Arnold.

You have been added to Judith Arnold's favorite list.

You can also sign-up to receive email notifications whenever Judith Arnold releases a new book.