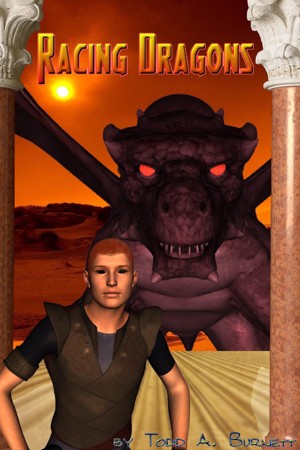 By Todd Burnett
Rated 4.20/5 based on 5 reviews
Racing Dragons is a satirical look at the future of space travel, technology and genetic engineering. This laugh-out-loud adventure sees cutthroat battles with salvage pirates, incredible action in the dragon arena, and the opening salvo to interplanetary war. This is a must for any fan of independent author science fiction, and has received outstanding reviews. More
Set in the not-too-distant future, Baxter Auriga is set with the task of collecting a live specimen dragon for sending to a private zoo. That, believe it or not, was the easy part.

Escaping from the police patrolling the restricted zones is a little more tricky. Fighting off pirates isn't a walk in the park either.

Getting dropped onto a penal colony at the back of beyond, forced into the dragon fights and trying to stay alive ... well ... it goes without saying. But when the dragon Bax caught refuses to fight and wants to be taken home, now it's just got really hard.

Todd has served eight years with the US Navy both as electrical repair technician and police criminal investigator, responsible for everything from the installation of high voltage lighting and distribution systems to conducting complex, meticulous criminal and administrative investigations.

Todd also gained considerable skills and expertise in sales and sales management in the motor industry, achieving a unique award from Volkswagen UK as a professionally qualified sales executive. This was followed by a wealth of experience in business development with a leading UK aerospace company, by heading an assortment of related specialist projects.

He currently works as an Electrical Design Engineer for a world renowned manufacturer of electrical and electronic goods.

Todd is also a published author, a skilled editor and wordsmith, and a keen networker.

Author of RACING DRAGONS, available in print from Amazon, and now as a Smashwords eBook.

Exciting, Adventuresome; complete with nasty villains and a stout-hearted dragon!

Racing Dragons is a story about a dragon who has been taken from his forest and is determined to return home, or die trying. It's about a dragon who can think, fly, and talk because he was genetically modified by humans. He is different, he is intelligent...and he knows it. In his eyes, humans have experimented with him for science, then kidnapped him for money, and finally, they have subjected him to Gladiatorial combat for the sake of entertainment. But, there is one human, Bax, who out of necessity, has promised to help this noble dragon return to his beloved forest. Together, they have a unique bond between them. One that will need to grow if they are to survive the nasty villains and the arena itself.

With regard to character development, scene setting, and storytelling, Todd Burnett has achieved an exciting story
which is well crafted and nicely written. Bax and his dragon along with their few friends are the kind of characters you want to know. What stands out for me is the simple moral of the story. Racing Dragons reminds us that some things are not for the taking. Some things are better left alone.

I'd recommend Racing Dragons to anybody who likes a good thrill ride and very likeable characters.
I recommend with 5 stars.

This was a fun read. Space travel, dragons, and some funny characters. Some of the dialogue was hard for me to follow due to a characters "piercings". I was given a copy of this book by the author, Todd Burnett, exchange for an honest review. I liked the book. Great weekend read. Jr. High and up. Violence, no swearing. Three stars.

Plan on being thrust into a world of dragons and adventure, where what can go wrong, does. Todd Burnett presents us with almost non-stop action that is buffered with his own brand of humor. The only downside for me was some of the character's language. It was hard to read and understand, so distracted from the story. Other than that, a great read!

Near non-stop action with a firm dollop of sarcastic whimsy, Todd Burnett's Racing Dragons is fun and adventure and I couldn't put it down! Breathless to see how the tangled mess would turn out, I was delighted!

A wild ride through a universe where Murphy Rules. Whatever could go wrong, DOES go wrong, at the funniest possible moment! The action (and the fun) just don't stop in Todd Burnett's Racing Dragons.

You have subscribed to alerts for Todd Burnett.

You have been added to Todd Burnett's favorite list.

You can also sign-up to receive email notifications whenever Todd Burnett releases a new book.