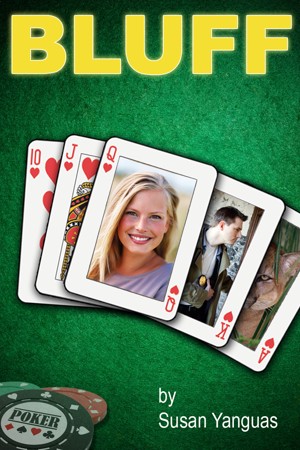 By Susan Yanguas
Rated 4.67/5 based on 3 reviews
A nearsighted young woman is the only “eyewitness” to the murder of a local environmentalist. She can’t identify the killer, but he can identify her... When the lead detective on the case also becomes her bodyguard after an attempt on her life, their growing attraction only complicates matters. But what neither suspects is that the killer has an inside edge very close to home. More
What do a nearsighted massage therapist, a rookie detective called “Fish,” a weekly poker game, and an endangered cougar have in common? Murder, it turns out!

Myopic Abby Ford is the only “eyewitness” to the murder of a local environmentalist. She can’t identify the killer, but he can identify her — forcing her to stay one step ahead of his hired goons. When the lead detective also becomes her bodyguard after an attempt on her life, their growing attraction only complicates matters. But what neither suspects is that the killer has an inside edge very close to home…

Set in a suburb of Baltimore, Bluff introduces a cast of quirky and endearing characters that will have you looking forward to the rest of this “crime lite” series.

Susan Yanguas is a writer/editor for a government agency, where she also teaches writing workshops. Her stories have appeared in Urbanite magazine and several Chicken Soup for the Soul books. She is a graduate of Cornell University and the Howard County Police Department’s Citizens’ Police Academy. Susan is the author of the Po-po Poker Mystery series of novels and a member of the Eastern Shore Writers Association. A former New Yorker, she now resides in Maryland.

BLUFF can be described as a comedic mystery, a romantic thriller, or maybe even a social satire with a bit of murder thrown in. Author Susan Yangaus has penned a well-plotted “cozy” mystery, which begins right from the start with a dead body rolled up in a tarp. “Eye witness” near-sighted Abby Ford-- a lawyer turned message therapist—described the body as being wrapped up like a burrito. Thus begins the fun word play, the quirky characters, and the tongue-in-cheek fun of the book. Although the mystery is compelling enough, I found that the real driving force of the novel was the cast of characters. Abby and the lead detective, sphinx-like Salvatore Santavillagio, aka “Fish” team up to identify the murder before he can get to Abby. Fish’s partner-- a tall, impeccably dressed and formal gentleman from India – is first introduced thus: “Detective E. S. Singh of the Property Crimes Unit was a fastidious man.” Singh is Felix to Fish’s Oscar as far as personal habits. Or, when the action hits, Singh could be seen as Spock—calculating and logical—to Fish’s wilder “Captain Kirk” like decision making skills. Circulating around them is a constellation of police detective friends who meet regularly for a poker game, and fulfill the role of a Greek chorus, commenting on the budding romance between Abby and Fish, or the progress of the case. More fun characters pop in and out of the story. There’s Harmony, a New Ager who communicates with cats and paints Abby’s apartment in all the colors of the Chakras, and there is Grandpa, who is the hands-down Romeo of his retirement home to name a few. But make no mistake; the story is not all huggably funny characters. There are plenty of dangers: firebombing, wild animals, car wrecks, and threatening notes to keep the reader turning pages. It is a great first novel in a series, well-edited, well-written, and fun. Give it a read!

(reviewed 2 days after purchase)
Linda Shubert reviewed on on June 9, 2013

The author of Bluff, Susan Yanguas, has an entertaining style similar to Harley Jane Kozak’s Wollie series and Janet Evanovich’s Plum series. If you enjoy a light mystery with a tease of budding romance then you'll enjoy Bluff. Yanguas takes you on a visual ride through Howard County Maryland as she plays out the possibilities of who-done-it. Add in tea leaves, tarot cards, yoga, and more as she peppers in a New Age backdrop.

Bluff is a light read that will have you searching the net for Yanguas’ next masterpiece.

A near-sighted eye witness. A new detective who can’t seem to fit in. A murder victim without any (known) enemies. These are the ingredients to “Bluff” Susan Yanguas’s first novel. Bluff is set in parts of Maryland that are not normally visited by crime writers, a fact which Ms. Yanguas uses to great advantage.

While it has its faults (most first novels do) Bluff is a well-paced crime novel with an interesting cast. The plotting is good as is the character development. It shifts back and forth from police procedural to witness in peril until bringing the two together for the clever resolution of the case. If you like a good story told well without excessive violence I recommend that you buy and read “Bluff.”

You have subscribed to alerts for Susan Yanguas.

You have been added to Susan Yanguas's favorite list.

You can also sign-up to receive email notifications whenever Susan Yanguas releases a new book.