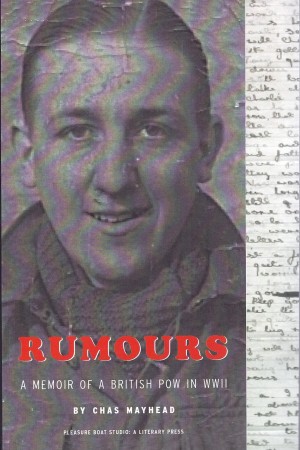 Rumours: The Memoir of a POW in WWII

Charles "Chas" Mayhead was one of the millions of young British lads of the '30s who didn't have a clear idea of what they wanted to do with their lives. One thing Chas did know was that he wanted to get out of his working-class London neighborhood and see the world. And he wanted to be able to afford a tailor-made suit. And he wanted to own a car.
When his nation called him to military service, he was happy to go in. At least he'd have a chance to see something new, have an opportunity to "be someone".
Before his basic training was completed, England had declared war on Germany. Suddenly the situation had changed. Chas was assigned duty in the Middle East, and within a year of his enlistment, he was separated from his company in the desert and was captured by the Germans.
What followed was a fascinating and terrifying experience of life as a prisoner during World War II: He was held as a captive in North Africa, shipped in a cargo vessel across the Mediterranean to Italy, and transported by train to a prison camp in Northern Italy. He then escaped across the Alps toward Switzerland, was re-captured just outside the Swiss border, was moved by freight car to a POW camp in Germany, and escaped again when the prisoners marched toward Dresden near the end of the war.

Reviews of Rumours: The Memoir of a POW in WWII by Chas Mayhead

You have subscribed to alerts for Chas Mayhead.

You have been added to Chas Mayhead's favorite list.

You can also sign-up to receive email notifications whenever Chas Mayhead releases a new book.