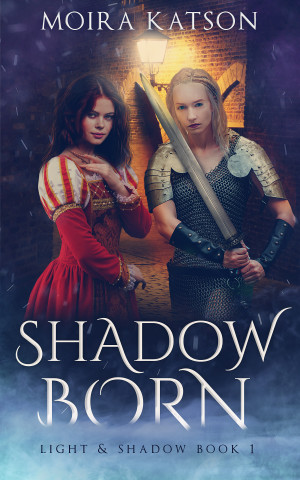 By Moira Katson
Rated 5.00/5 based on 8 reviews
Friendship and loyalty, secrets and intrigue, prophecy and illusion…

I was four hours old when I was cast out by my mother. I was cursed, she said. Kinder to let me die in the snow and the wind than let me live, only to be betrayed.

I was twelve when the Duke found me and turned me into a Shadow: bodyguard, spy, and assassin. More
Friendship and loyalty, secrets and intrigue, prophecy and illusion…

I was four hours old when I was cast out by my mother. I was cursed, she said. Kinder to let me die in the snow and the wind than let me live, only to be betrayed.

I was twelve when the Duke found me and turned me into a Shadow: bodyguard, spy, and assassin.

I was fourteen when he brought me to court. He wanted his niece on the throne, by any means possible. I was to be her weapon, wielded as she and the Duke saw fit.

But she wants more. She’s playing her own game.

And the court holds its own secrets. A war centuries in the making is ready to erupt, and we are in a race against time to keep it from consuming whole empires.

Moira Katson is an indie author living in the oft-frigid wastes of the American midwest. As a transplant, she is learning to love hot dish, fried food on a stick, ice fishing, and the hilarious faces her friends make when she posts about winter temperatures. Her less geeky interests include running, STRONG coffee, and cooking; her more geeky interests include gaming, voracious reading, and, of course, writing science fiction and fantasy novels!

You can find Moira’s work online through Barnes & Noble, Amazon, and all Smashwords affliates. Moira is also on Facebook, and can be found on twitter as @moirakatson.

I loved this book. The best praise I can give this book is that I didn’t want to do anything else while reading it. I didn’t even want to work on my own stories. It is the best independently published book I have read. I found the writing easy to follow and well done. Any typos are easily over-looked because of how great everything else is. The plot was nothing new, but well developed and evenly paced. The characters were believable and I was able to identify with them--or with aspects of them--immediately. I cared for the characters and wondered how they would react to the problems presented by the plot. I usually pick up on the plot and predict much of what will happen, though not always how it will happen. Here, I predicted a great deal, but was very pleased in how it was accomplished and greatly surprised in several placed. This is the first review I am doing because of how much I loved it. I am looking forward to the others which I will definitely buy. I recommend this to anyone, and have shared it with family members. It clearly deserves five stars.

Very intriguing read. I look forward to reading the rest of this series.

A well written, medieval fantasy that focuses on Catwin, a young shadow (that is bodyguard, assassin and spy) in training. Catwin is a peasant who comes to the attention of her Duke after trying to steal the dagger of the Duke's shadow (not the smartest thing in the world). She is given a task, learn to be a shadow, protect the Duke's niece and heir, Mirel, from the Duke's enemies. Catwin and Mirel become the Duke's tools in his plans to keep power. Both Catwin and Mirel struggle to hold onto their ideals and their lives in the king's court, where everyone is their enemy, especially the Duke.

There is very little action. The strength of this book is characterization of Catwin and Mirel, and the relationship between the two. They never quite become friends, but progress from enemies to allies as the story unfolds. Also, the layers of intrigue at court are complex and interesting.

The bad - the cliff hanger ending. This book doesn't complete so much as it simply stops, which is annoying.

This book was on my to-read list for a couple of months as I thought it was just another fantasy novel; was I wrong. The book is set in a non-magical world, reminiscent of medieval Europe. The story tells the story of two teenage girls trying to survive in a hostile court.

Told in the first person past perfect, the story grabbed me on the first page and kept me enthralled until the last.

This book has been a slow burner for me. I have really enjoyed knowing that when I had a spare minute I could pick it up and enjoy it. I will be reading the next one (and probably the third part as well) because I am intrigued by the relationship between the two girls.

I started this book this morning as a way to fill in some time but ended up finishing it al in one go. (Much to my pups disgust - her walkie was delayed because of it) I'm now looking forwards to reading the next instalment. There were a few lines that jarred a little as I was reading but not enough to spoil my enjoyment and I was certainly swept away with sympathy for both the girls.

I download this book just for something new to read and a few pages in I was hooked. It's very rare for me to nowadays find a new author that I just want to keep reading and reading. Well recommended.

Off to buy the trilogy.

You have subscribed to alerts for Moira Katson.

You have been added to Moira Katson's favorite list.

You can also sign-up to receive email notifications whenever Moira Katson releases a new book.