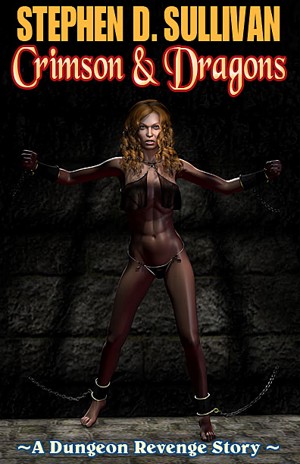 "Is there anything in the multiverse worse than waking up naked and chained to a dungeon wall? I say, Yes: dying before you get to pay back the son-of-a-bitch who put you there."

Stephen D. Sullivan has written more than 50 books across many genres: fantasy, SF, horror, detective, movie adaptations, and more. Readers the world over enjoy his fast-moving prose style and hard-hitting action sequences. He has won numerous awards for his work, including the 2016 Scribe Award for his horror-comedy novel, Manos: The Hands of Fate.

Not sure where to start? Try these:

There are plenty of others to choose from, too. (Including some books from other authors published by Steve's Company, Walkabout Publishing.)

Crimson and Dragons is a short story set in Sullivan's Blue Kingdoms Universe. It's a fun fantasy action read and although not the first Crimson story, a good introduction to this recurring character. It follows Crimson, a female warrior, as she defeats an evil wizard and the dragon he has summoned and rescues the remaining prisoners.

The writing is polished and the action flowing, with a great opening line: "Is there anything in the multiverse worse than waking up naked and chained to a dungeon wall?" Between this line and the matching cover image, you might at first wonder if this story is heading towards erotica, but no, apart from a tiny bit of suggestive dialogue it doesn't get distracted at all from the main story.

Although I had not come across Crimson before, sufficient backstory was provided to both inform and intrigue me, and in such a way as to not interrupt the pacing of the action. Despite being immortal (of a sort - when she dies she is reincarnated as an adult with full memory retention) motivation and stakes are established in the form of revenge and also rescuing the other prisoners.

The other characters are well-defined in spite of the brevity of the story and focus on action, although the evil wizard is a stock standard fantasy villain to the point of caricature. One of the characters, Princess Rachelle, is developed a little more than others, which bodes well for a future guest role in the Crimson stories.

I have classified this story as fantasy, but there are references throughout to our own reality - Einstein, cosplay, Saturday matinee - with the reference in the opening line to the multiverse giving it an SF/alternate world tinge. Not much is said about the setting, but it seems a typical fantasy setting, with elves, dragons, castles, active gods and magic. However Sullivan has certainly left the door open for Crimson to appear in any setting.

It's a fun, short read and would fit in well in a warrior women anthology. Chicks in Chainmail, anyone? 4/5

You have subscribed to Smashwords Alerts new release notifications for Stephen D. Sullivan.

You have been added to Stephen D. Sullivan's favorite list.

You can also sign-up to receive email notifications whenever Stephen D. Sullivan releases a new book.