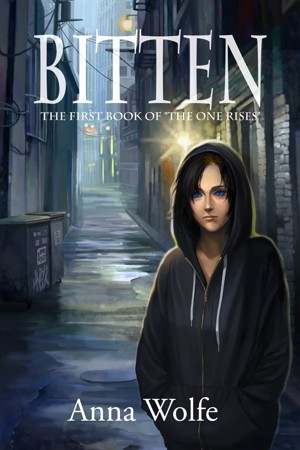 Rated 5.00/5 based on 2 reviews
Only fanatics and lunatics believe demons can possess human beings. Or at least, that’s what Callie White thought until one possessed her best friend. Now, dealing with hungers and powers she doesn’t understand, she wants to make sure no one can bring another demon over. When that proves more difficult than expected, Callie is pushed to her limits and discovers just how common demon possession is. More
“There is another world touching ours that is filled with demons or, at least, that’s what we call them. They call themselves something else entirely, though that is neither here nor there. Every now and again, human beings manage to pull these demons through to our side. The human dies, of course, and the demon gets a person shaped suit to live in. We call these creatures the demonridden.”

Only fanatics and lunatics believe demons can possess human beings. Or at least, that’s what Callie White thought until one possessed her best friend. Now, wanted for murdering the thing that crawled into her friend’s body and dealing with hungers and powers she doesn’t understand, Callie White just wants to die. She just has to make sure no one can bring another demon over before she goes. When that proves more difficult than expected, Callie is pushed to her limits and discovers just how common demon possession really is.
Download: epub mobi (Kindle) pdf more Online Reader
lrf pdb
Price: Free! USD
Add to Library
Create Widget
Tags: witches demon possession magic adventure
About Anna Wolfe

I'm a college professor with a Ph.D. so new it squeaks. I have a husband, a heterolifemate, and two cats. I'm willing to try any food I've never eaten at least once. I have jumped out of a plane (awesome), blown fire (also awesome), learned that having accelerant soak into your sports bra hurts like hell, and am a pagan (please note that this does not mean I'm a satanist).

Also in Series: The One Rises

Reviews of Bitten by Anna Wolfe

Anna Wolfe understands the flow. I love it when authors drag me in and I am unable to let go. I finished "Bitten" and immediately bought "Addicted". Upon finishing that I felt annoyed that Wolfe had no more to sell me. Authors should consider doing something about that. Needing to be patient is a bummer.

Callie is a fascinating character. In the prologue we get our first taste of her right after she has gotten her first and last taste of Owen. It is obvious that the girl is struggling with her demon-infection because killing Owen felt soooo much better than Callie wants it to.

Quite literally we are off to a killer start. While the first scene was violent, the rest is not about violence, far from it.

Imagine the relief and terror it must have inspired in Callie to discover that she was not the only demon-bitten person running around in the world. Here you are living life with parents and a brother you love and then - kaboom - you get bitten by a demonridden best friend, watch your brother have his head torn off by that same friend and end up killing that friend yourself. All in a day's work. In Callie's case it got her thrown into a psychiatric institution from which she ended up running away from.

Then some other crazies find her and claim they too are infected and somehow those crazies become her family - a slightly dysfunctional family, but Callie is used to dysfunction.

Silas is the one who is in charge. He has the most experience with the demon/witch world. Edie and Mark are his students. All of them have great respect for Callie's powers but are prepared to kill her if she becomes a danger (their definition of danger). Callie is greatly relieved knowing that. Edie seems afraid of her and Mark cannot decide whether he lusts after Callie.

"Bitten" has an intricate and fast paced story, but it was the characters that made it a page turner. Callie's struggles and the others who help her through/struggle with her are obviously fantastical, but they're gritty enough to seem familiar.

You have subscribed to alerts for Anna Wolfe.

You have been added to Anna Wolfe's favorite list.

You can also sign-up to receive email notifications whenever Anna Wolfe releases a new book.