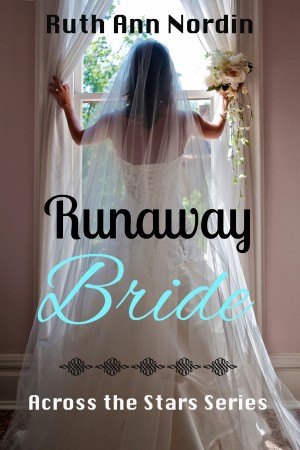 Rated 5.00/5 based on 1 review
From the moment Mark Tanner sees Lexie Rogers, he knows she’s destined to be his wife. There is only one problem: her fiancé. Mark knows she’s better off with him, but can he convince her of that before it’s too late?

*This is book 2 in the Across the Stars Series

Book 1: Suddenly a Bride
Book 2: Runaway Bride
Book 3: His Abducted Bride More
From the moment Mark Tanner sees Lexie Rogers, he knows she’s destined to be his wife. There is only one problem: her fiancé. Mark knows she’s better off with him, but can he convince her of that before it’s too late?

Lexie’s mother has planned out her life for her. Living in the shadow of the older sister who never pleased her mother, it’s up to Lexie to be the daughter her sister never was. And now that includes marrying the man her mother selected for her. Then Mark comes along and turns her world upside down. Will she throw caution to the wind and run away with him? Or will she make the biggest mistake of her life and stay with her fiancé?

*This is book 2 in the Across the Stars Series.

Also in Series: Across the Stars

Runaway Bride by Ruth Ann Gordon
Across the Stars Series Book 2
Mark Tanner had come from Pandoran the same time as Chris West. Only Mark wanted to find his own wife instead of letting the agency find one for him. He decided that Caitlyn’s sister was the one for him, too bad if she was already engaged.

Lexie Rogers was learning how to be the perfect future wife for Dr. Nick Hammond. How to say the right things to the right people. How to look pretty for her future husband and not embarrass him. Meanwhile her mother was planning the wedding and her future life. But what did Lexie want?

Suddenly a Bride is book one in this series. Two men come from a planet where women no longer exist. They truly appreciate not only the women they find as life mates but also the idea of having children, something that had ceased as a normal function on their planet. These guys from another world are quite endearing to all around…..well maybe not the girls mother.
**Sensual content within marriage
http://justjudysjumbles.blogspot.com/2011/09/ruth-ann-nordin.html