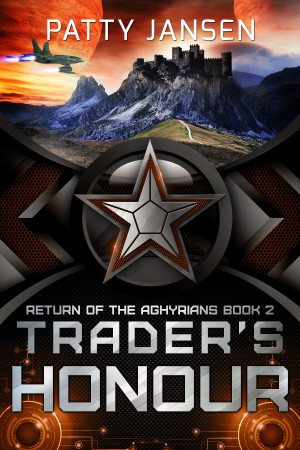 By Patty Jansen
Rated 4.50/5 based on 2 reviews
To keep her position as interplanetary Trader, Mikandra needs to prove her employer's innocence. Instead, she discovers secrets that explain her people's history and threaten the foundations of her proud nation. More
Mikandra Bisumar is useless to her father: she carries the curse of infertility that plagues the Endri people of Miran. Forced to work in the hospital to pay her duty to her proud nation, she dreams of becoming a Trader, one of the people who bring great prosperity to Miran.
To her surprise Iztho Andrahar, from the city's most prestigious Trading family, has agreed to take her on. That is where her troubles begin.
Her father is so angry with her that she has to leave her home. Worse, the Andrahar Traders have been accused of smuggling. Iztho has disappeared and the business license suspended.
Mikandra has nowhere to go, except try to help Iztho's brothers prove their innocence.
In her last meeting with Iztho, he mentioned getting married to a woman from neighbouring city-state of Barresh. Iztho's brothers know nothing of this, and think she is crazy.
Going to Barresh by herself while never having left the country is probably not the smartest idea, but she's desperate for the family's licence to be restored, because without her job, she'll be homeless.
In Barresh she finds strange and creepy people who can read minds and who know things about the Endri people that can both solve their fertility problems and tear apart the ancient foundation on which Miran is built. Iztho had found out these things, which someone is trying to keep secret. This is where her troubles really begin.
Available ebook formats: epub mobi pdf rtf lrf pdb txt html
First 10% Sample: mobi (Kindle) lrf pdb Online Reader
Price: $5.99 USD
Buy Add to Library Give as a Gift
How gifting works
Create Widget
Tags: history space opera planets mindreading
About Patty Jansen

Also in Series: Return of the Aghyrians

This science fiction story of Mikrandra’s journey to find her true calling and true love was believable and fun to read. I enjoyed the characters in the book, the description of imaginary places and the growth of Mikandra as she learned to become independent while interacting with persons and places she would never have encountered or learned to know if she had not been willing to leave her parents’ home and pursue her goals. This is a standalone book in a series written by Patty Jansen. I had not read the first book in the series before reading Mikandra’s story and wondered if it would make sense – it did. I thoroughly enjoyed this book and would like to read more stories by Ms Jansen in the future.

Trader's Honour by Patty Jansen is a sort of standalone sequel to Watcher's Web. It takes place mainly on the same planet and some of the same people make appearances, but the main character is new and the main part of her story is entirely separate to the character's from Watcher's Web.

Mikandra has guts, something I like in a character (to the surprise of no one, heh). Instead of continuing to sit around in what she sees as a broken society, she takes steps to change her situation. First she applies for the Trader Academy, going to another Miran Trader family when her Trader aunt won't take her as an apprentice. Then, when it looks like her dreams will fall through because her sponsor family is in trouble, instead of running back to the relative comforts of home (if an abusive father can really be called a comfort), she sets out to help her sponsor's family. Helping in this case, involves travelling to another continent, when she'd never left the city before, and trying to track down her recalcitrant sponsor. Her mission turns out to be harder than she'd assumed but she sticks it out, even after being robbed on her first day there.

I enjoyed reading about Mikandra a lot. I was a bit hesitant to read Trader's Honour because I didn't enjoy Watcher's Web — I gave up about half way through mainly because I couldn't relate to the main character's reactions to her situation — but I decided to try the sample on SmashWords and was hooked. Mikandra is a very different character in a different situation. So if you haven't enjoyed Watcher's Web but the premise of Trader's Honour sounds like something you'd enjoy, I urge you to give it a shot.

Trader's Honour deals quite a bit with notions of how societies (should) work. The Mirani have two classes of people, the nobility (which includes Mikandra) and the working classes. The noble class not only limits the prospects of its women, but also believes that it's their duty to protect and care for the lower classes. As we learn quite early on, they don't do as good a job as they could. By contrast, Barresh, the other continent, is thought to be primitive and more or less useless. But when Mikandra arrives there she finds that, yes, it is very different (there's a bit of appropriate culture-shock on her part). Over time she learns that different does not mean worse, not the way the other nobles think, and starts to see a lot of potential around her. It made me think of biases against developing countries and how some are actually the world's fastest growing economies.

When the characters from Watcher's Web started showing up I felt a bit frustrated that I didn't have as much background information on them as if I'd finished the book, but it really wasn't necessary. It merely put me on the same level as Mikandra. And if I hadn't known there was another book, I'm pretty sure I wouldn't've cared.

Trader's Honour is an enjoyable science fiction read. It's low on technobabble and explicit sciencey stuff, although the worldbuilding is fairly solid. (If you're curious, Patty wrote about the worldbuilding here.) As such, I think it might also appeal to fantasy fans who don't mind a few aeroplanes and a spot of interplanetary travel in their fiction. I highly recommend it to science fiction fans.

You can read more of my reviews on my blog.

You have subscribed to Smashwords Alerts new release notifications for Patty Jansen.