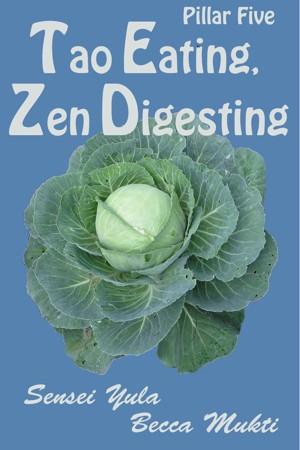 By Sensei Yula
Food is one of the fountains of life. In order to serve as a useful guide for those who wish to return to consuming real food, this book details 150 food items with respect to their thermal nature (natural energy), nutritional value, therapeutic indications, contraindications, and medicinal applications. Included are also 28 simple recipes which are easy to make and delicious to eat. More
In addition to being informed of the scientific analyses of food, knowing the thermal nature of food is essential, even for those who are the regular users of natural food. This is because the energies (thermal natures) of the foods we consume interact with each other once they have entered the body. This results in both positive and negative effects. The positive effects are good digestion, a healthy body, and a calm mind. The negative effects are poor digestion, unhealthy organs or skin, and a disturbed mind. This book directs you on how to ensure a positive effect of the foods you consume based the right combination of foods, seasonal factors and the method of preparation.

Sensei Yula has been practicing and teaching yoga, martial arts and healing arts for over 36 years. In the late eighties, he founded Centre for the Ways in Richmond Hill, Ontario. Prior to that, he ran a successful business in Halifax, Nova Scotia that included a health food cafe, several health food retail outlets and martial arts classes.

As an acupuncturist and traditional Chinese medicine practitioner, he successfully treats people with conditions including heart disease, digestive problems, lower back aches, headaches, insomnia, mental disorders, gynaecological problems, infertility, and many others.

From this experience as well as his training in Shiatsu, he has developed a system called Zen Kiatsu-Tao TCM. It is very relaxing and effective for the prevention and cure of many disorders.

To share this experience, he has co-authored The Eight Pillars of the Heaven (Volume One, 2010; Volume Two, 2013) as well as Chi Kung-Yoga Energetics for Health: A Manual for Daily Practice (2012). He is currently working on books related to his repertoire of experience in healing and martial arts.

Also in Series: The Eight Pillars of the Heaven

You have subscribed to alerts for Sensei Yula.

You have been added to Sensei Yula's favorite list.

You can also sign-up to receive email notifications whenever Sensei Yula releases a new book.