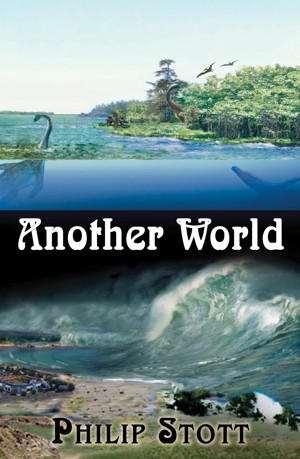 By Philip Stott
Biblical science fiction. What was it like before Noah’s flood? Heart-racing adventure—a bronto-infested floating forest–a scream, a devastating crash—heavens threaten, the earth trembles—existence is in question.. More
An action-filled novel that combines Biblical and scientific themes with heart-racing adventure.

Traveling by mag-sled, Japh overnights in a bronto-infested floating forest. A scream in the night, a sudden devastating crash of[either insert the word devastation after of, or delete of for briefer excerpt], and flight becomes the only option, beginning a stunning chain of events which will change not only his life, but the entire course of history.

Philip Stott was born in England in 1943. He studied at Manchester University, where he obtained B.S. (with honours) and M.S. degrees in Civil Engineering. He lectured at universities in Nigeria and South Africa and carried out research in the analysis of geometrically nonlinear structures. He shared the Henry Adams Award for outstanding research in 1969. While lecturing at the University of Witwatersrand in Johannesburg, South Africa, he studied biology. After leaving Wits he joined an engineering consulting firm. His ongoing interest in all aspects of science led to studies in mathematics and astronomy with the University of South Africa and, later, to four years of part-time research with the Applied Mathematics Department of the University of the Orange Free State in Bloemfontein, South Africa.
After many years as a firm atheist, he was converted to Christianity in 1976. Following several years of studying the conflicting claims of secular science and Scripture, he actively entered the Creation/Evolution debate in 1989. In 1992, he was invited to address a conference in Russia and since then has lectured, addressed conferences, and taken part in debates in eastern and western Europe, America, Canada, and southern Africa. Venues have included the European Centre for Nuclear Research (CERN), a UNESCO International Conference on the Teaching of Physics, and the Russian Academy of Sciences. Philip Stott is married to Margaret (born Lloyd). They have two children, Robert and Angela; and two
grandchildren, Sean and Julie. They live in Bloemfontein, South Africa.

Reviews of Another World by Philip Stott

You have subscribed to Smashwords Alerts new release notifications for Philip Stott.

You have been added to Philip Stott's favorite list.

You can also sign-up to receive email notifications whenever Philip Stott releases a new book.