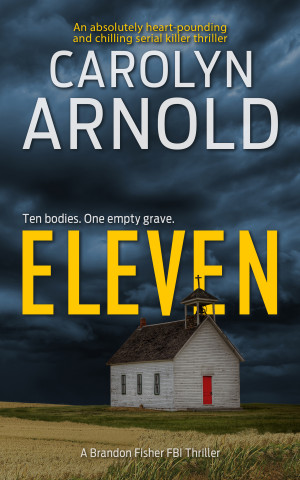 Rated 1.00/5 based on 1 review
In this absolutely heart-pounding and chilling thriller, rookie FBI agent Brandon Fisher takes on his first investigation with the Behavioral Analysis Unit and becomes the target of a serial killer. More
“Silence of the Lambs, move over. Eleven is an absolutely stunning performance.” – Goodreads reviewer, ⭐⭐⭐⭐⭐

In this international bestseller, rookie FBI Agent Brandon Fisher takes on his first case with the Behavioral Analysis Unit, but will he survive long enough to catch the killer? Eleven is a fast-paced, spine-tingling thriller that will have you gasping for breath at every twist…

When Brandon Fisher joined the FBI Behavioral Analysis Unit, he knew he’d come up against psychopaths, sociopaths, pathological liars, and more. But when his first case takes him and the team to Salt Lick, Kentucky, to hunt down a ritualistic serial killer, he learns what nightmares are truly made of.

Beneath a residential property, local law enforcement discovered an underground bunker with circular graves that house the remains of ten victims. But that’s not all: there’s an empty eleventh grave, just waiting for a corpse. The killing clearly hasn’t come to an end yet, and with the property owner already behind bars, Brandon is certain there’s an apprentice who roams free.

As the FBI follows the evidence across the United States, Brandon starts to struggle with the deranged nature of his job description. And if the case itself isn’t going to be enough to push Brandon over the edge, he’s working in the shadow of Supervisory Special Agent Jack Harper, who expects nothing short of perfection from his team. To make matters even worse, it seems Brandon has become the target of a psychotic serial killer who wants to make him—or his wife—victim number eleven.

Join the hundreds of thousands of readers who have already taken the plunge into a series that will take you into the minds of the most heinous and disturbing serial killers the world could ever imagine. Buy this international bestselling book today and hunt a serial killer alongside the FBI!

CAROLYN ARNOLD is an international bestselling and award-winning author, as well as a speaker, teacher, and inspirational mentor. She has several continuing fiction series and has many published books. Her genre diversity offers her readers everything from police procedurals, hard-boiled mysteries, and thrillers to action adventures. Her crime fiction series have been praised by those in law enforcement as being accurate and entertaining. This led to her adopting the trademark: POLICE PROCEDURALS RESPECTED BY LAW ENFORCEMENT™.

Carolyn was born in a small town and enjoys spending time outdoors, but she also loves the lights of a big city. Grounded by her roots and lifted by her dreams, her overactive imagination insists that she tell her stories. Her intention is to touch the hearts of millions with her books, to entertain, inspire, and empower.

She currently lives near London, Ontario, Canada with her husband and two beagles.

PROFILERS. SERIAL KILLERS. THE HUNT IS ON. Join rookie FBI agent Brandon Fisher and a team of profilers with the Behavioral Analysis Unit as they pursue serial killers.

This is the perfect book series for fans of CRIMINAL MINDS, NCIS, SILENCE OF THE LAMBS, SEVEN, DEXTER, LUTHER, and TRUE CRIME.

We're so confident you'll love this series, we're giving you the e-book version of ELEVEN for FREE.

Reviews of Eleven by Carolyn Arnold

Disappointing And Contrived Mess:
The time frame is 2011. The setting floats between Kentucky, Florida, and areas in, and around, Washington D.C.. The story opens at a crime scene in Kentucky. This is the first case for rookie BAU FBI agent Brandon Fisher. The scene indicates a serial killer, but the owner of the home where the crime scene is located is already in prison. The hunt is on to prove he is guilty, and to find whomever is helping him. The pacing is herky-jerky. For those who prefer to know these things, there is some graphic language, and there are vivid and graphic descriptions of some gruesome crime scenes.

The dialogue is realistic, and the conversational flow is smooth and natural. Even though the dialogue is realistic, it is poorly done. Sometimes it manages to be interesting, but, too often, the author doesn't go into enough detail re: the clues found at the crime scene. The title of the book is "Eleven". This number holds great significance for the killers, and it's a major part of the crime scenes, but the author barely seems to explain why it is important to them, or to make its importance feel integral to the story. Another problem with the dialogue? I didn't like 3 of the 5 core characters, so I didn't care what they had to say.

I don't expect, or want, the characters in books to be perfectly perfect. They're more relatable and realistic when they have foibles as well as strengths. But, in order for me to really enjoy a series, I need the majority of the core characters to be likable in some way. It's interesting the author mentions the show "Criminal Minds", because the 2 core characters I did like in this book vaguely remind me of 2 characters from the show. Nadia, the computer geek in the book, is as brilliant and kind as is the Penelope Garcia character from the show. Zachery, one of the investigative agents on the team in this book, shares some traits with the charming Spencer Reid character from the show. Neither Nadia nor Zachery get enough facetime in this book.

We're stuck with the 3 I didn't like at all: the team leader, Jack (late 50's[ish]); Paige (40), and the newest team member, Brandon (29). Jack is disrespectful, arrogant, and brash to the point of offensiveness. Paige is supposed to be smart, and her skill set is supposed to include respect, sympathy, and empathy. Well, she knowingly sleeps with a married man, and she has no remorse for doing so. Where is her respect and empathy for the guy's wife? The man she sleeps with is Brandon. How they originally met is unclear. I'm guessing it was during his training, so that makes it even worse, because she is a ranking superior to a junior agent. Supposedly, they didn't realize they'd wind up on the same team, but the whole scenario between them is extremely contrived. The author even brings the wife's p.o.v. into it, but it doesn't help. It all feels extraneous as opposed to integral. Brandon is arrogant, selfish, hypocritical, and completely unappealing.

The mystery is a mess, too. It is contrived and hokey. The author tries to make one of the team members a potential victim, but it reeks of deus ex machina. She never really seems to give a complete or logical explanation of the clues. All the investigative efforts feel very haphazard, and the overall effect is of randomness. At one point, one of the team members fears for the safety of one of their loved ones, but Jack's reactions to the threats, and to the fears of the team member, feel, at best, unprofessional and callous. The denouement is idiotic. It starts when two team members knowingly walk into a potentially dangerous situation with a viable suspect. They don't bother letting anyone know where they are even as they tell themselves the situation is dangerous, and they need to contact the rest of the team. Really?!? Unprofessional, stupid, contrived-- you get the idea.

This book is amateurish, surface, illogical, unsatisfying, and a complete waste of time. Do yourself a favor and skip it. I will actively avoid the rest of the series.

You have subscribed to alerts for Carolyn Arnold.

You have been added to Carolyn Arnold's favorite list.

You can also sign-up to receive email notifications whenever Carolyn Arnold releases a new book.