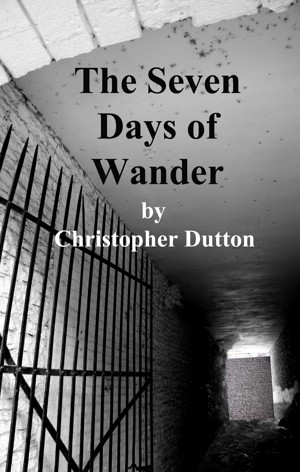 The Seven Days of Wander

The beggar boy, the main character of this book, was the adopted son of Christ but was abandoned by the disciples after the Crucifixion.
Destiny and fate revolve and conflict around this "Beggar's Young Son" as the now thirty year old man is called.
As a young man, he returns for seven days to the City to take up his father's work, in an attempt to rectify his distance from humanity, from his own soul, from his own destiny.
He uses logic, reason and an appeal for human compassion to try to bridge to the people of the City but finds only failure for himself as he cannot be as psychically insightful and empathic as his father was.
Each time he feels this deeply as his own self-failure.
In the final chapter, the young Beggar leaves the City in the company of a strange new prophet and comes upon a village carved out of hope and salvation but slipping again into despair.

The author explores such topics as humanism, free will, theology, capital punishment, political systems, ethics, euthanasia, evolution and ,ultimately, the value of society to the individual and the individual to society.

Chapter one to three...Deals with concepts of creation, man, god; in that a god will have no greatness more than the man which creates it, and it, the man. Beggar boy sells mirrors to be the idols of their personal gods. Then , he must fight in court to disprove the crime of fraud against the people.

Chapter four. Beggar boy interrupts a ‘beating’ by schoolmaster of young boys. The discussion explores crime vs. punishment as a tool of ‘change’.

Chapter five. Beggar explores extremes of poverty, leadership and tyranny as he progresses from poor hovels to an execution pit to the king’s audience. He pleas for the lives of condemned slaves. Explores concepts of social order, tyranny, freedom.

Chapter six. Beggar interrupts argument amongst three brothers over law vs. assisted suicide for their father. The concept argued is wether conscience of ‘I’ is above conscience of communal law.

I first began writing a long time ago as a poet. Poems turned to prose. Prose matured and grew a tale and traveled haphazard but in a novel way.

I wrote from the bewilderment of life...I wrote not for gain but out of loss. I used to say I was a ‘god-hunter’.....and that voice would either find me Saint Theresa’s ecstasy, Krishnamurti’s peace or Nietzsche's madness.
I found no conclusions, no doors but eventually the walls I wrote on became grafittized and tapestaric.....
I had become a poor painter in words....

I have written a number of books on taoist philosophy (Tiger and Bent Tree); social/religious philosophy (Seven Days); adventure fiction (Firestorm) ; political theory (Political Moments); short stories (Cloaks) and a series in children books (Rubear)
I am currently working on another Political book and, also, a fictional novel about a 12 year old boy dying of cancer during a war in Europe in the mid 2030s.

Poet
The poet makes a feast out of dirt and then minces his words.
The poet is goat footed at the banquet, grinning widely into everyone's distaste.
The poet sticks shit to a blanket.
The poet fornicates with shadows.
The best poet buzzes darkly incessant in your fabric skull.
The worst poet is an indigestion.
In any coffee shop, you can smell poets by their inertia.
Good poetry is waterproof. Everyone has at least one poem in their closet. It is solely theirs in the way we forget the maker of a shoe after we have worn it awhile.
When poetry dances, it is clothed; you are naked.
The drums rhyme.
If you are patient, everything rhymes.
Even God.

You have subscribed to alerts for Broken Walls Publishing.

You have been added to Broken Walls Publishing's favorite list.

You can also sign-up to receive email notifications whenever Broken Walls Publishing releases a new book.