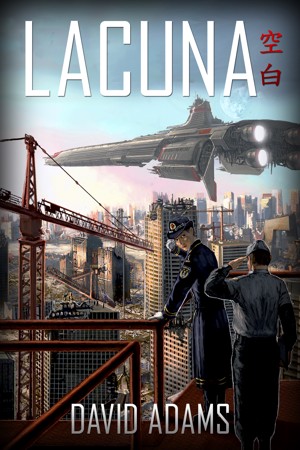 By David Adams
Rated 4.20/5 based on 5 reviews
"Never again attempt to develop this kind of technology."

It is with these words that an unknown alien attacker destroys the Earth cities of Tehran, Sydney and Beijing. Fifty million people die... and nothing is ever the same again. More
"Never again attempt to develop this kind of technology."

It is with these words that an unknown alien attacker destroys the Earth cities of Tehran, Sydney and Beijing. Fifty million people die... and nothing is ever the same again.

Some call them Demons, some call them Aliens, but to Chinese Naval Captain Melissa Liao they are the enemy. She is given command of one of three great warships built to fight the "demons", the TFR Beijing.

Her task is simple. Find who attacked Earth and why... then stop them.

Book one of the Lacuna series.

Don't miss these short stories set in the Lacuna universe:

I've always been thinking of stories for as long as I've been alive. I have way, way, way too many to tell and far too little time to tell them.

I joined UFOP: Starbase 118, a Star Trek roleplay-by-emails group, in 2010 and it was there where I learned my craft. But despite being one of the more active writers in the group and simming to my heart's content, I still couldn't tell all the stories I wanted to. It was only in 2011 that I actually started shaping and weaving those random, jumbling, chaotic masses of thoughts into coherent narratives and began self-publishing.

Writing's my full time job now. I write a little science fiction, a little fantasy, a little humour and comedy, and a few other things all over the place.

I really enjoyed this book. The underlying premise was interesting and the characters were both relatable and realistic to me. I was very please to have the chance to read such a page-turner. While it might not tax the brain too much, it is definitely a decent read.

(review of free book)
Hannes Birnbacher reviewed on June 2, 2016
(no rating)
No important literature ... but quite entertaining. Three stars from me for good SF.

Another reviewer suggested that the first book in the series was free to get readers hooked. It worked.

This is a standard navy-in-space story with battles and boarding parties. It's not something new and innovative. It's not a series that will totally revolutionize the science fiction genre. However, it's well-written and I didn't get bored reading it, and it's good enough that I'm buying the next two in the series.

Very good read!Once I started reading it I couldn't stop! The basic premis of the story makes terric sense. We barborous earthlings develop a technology that a galactic alliance not only doesn't want us to have but no one else either! Much more believable than green eye bugs come to earth to rape our women and eat our babies etc! Nicely crafted! The ending will both surprise you and doesn't! If you read only one science fiction book a year this should be it!

Im a reader not a writer so please forgive the length.
I read at work between calls and as such have to jump in and out of story mode quite frequently. Because of this I like stories that have a good flow and plenty of action. I was not dissapointed with this book or the rest of the series. Great characters. I thoroughly enjoyed it and await the next book eagerly
Thank you David

THE BOOK
Lacuna: Demons of the Void by David Adams is a sci-fi military novel about an attack by aliens in an attempt to supress Earth’s newest space-age technologies. It is also FREE right now on Smashwords.
WHY I PICKED IT UP
The summary takes a well used premise, but adds some mystique by using excellent writing. Plus, the wordcount here is substantial; this is obviously a full book we’re getting.
WHERE/WHY I STOPPED
I read to the beginning of chapter three and I’m not bored yet (I just want to get this review up). Adams does a good job of generating interest by starting in medias res (literally–it’s the prologue’s title) and making us care by centering the narrative around the reactions of one character.
He continues with more characters (some more memorable than others) and a breif explanation of how his sci-fi technology works. The balance of real science and fake stuff is pretty good and the rules of his universe are made clear.
The scientist character even goes so far as to make reference to Star Wars, Star Trek, and X-Men. This works well here because it fits withtheir personality and so performs dual function as homage and characterization.
WHAT COULD BE BETTER, IF ANYTHING
The first few chapters skip in time a lot, which I consider to be a cheap ploy in literature, but it works and doesn’t detract from the narrative. I found one single typo, so not too bad there. And my last bit of constructive criticism is the similes. They’re a bit hit and miss and can be a tiny bit distracting.
All in all, these are small criticisms and the book is a good read; Adams clearly understands the rules of good storytelling (he names chapters after them).

RECOMMENDATION: READ
If you’re into sci-fi, this is one to pick up. It is the first in a series, but whether Adams is doing the usual ebook strategy of hooking them with the first and charging for the rest, a free 60,000+ word book is nothing to scoff at. Even for his amazon asking price of $5 it’s a deal.

You have subscribed to alerts for David Adams.

You have been added to David Adams's favorite list.

You can also sign-up to receive email notifications whenever David Adams releases a new book.