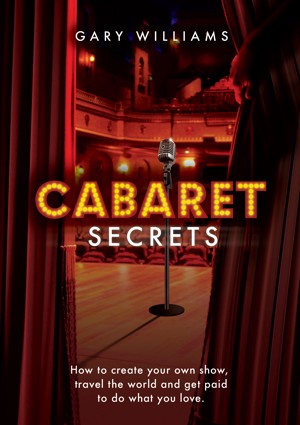 Cabaret Secrets - How to Create Your Own Show, Travel the World and Get Paid to Do What You Love

By Gary Williams
Rated 5.00/5 based on 1 reviews
A practical guide book for singers who want to create their own cabaret show, or improve the one they already have.

Cabaret Secrets covers everything from finding a theme, scripting a show, using comedy and running a rehearsal. There's lots of practical advice on how to find an agent, working on cruise ships, promoting your show and ordering musical arrangements. More
Star of the West End's 'Rat Pack' and cabaret stalwart, Gary Williams, shares the secrets of his success in Cabaret Secrets – a practical guide with everything you need to create your own show, travel the world and get paid to do what you love.

Written for singers who want to create their own cabaret show, or improve the one they already have, Cabaret Secrets covers everything from finding a theme, scripting a show and running a rehearsal. There's lots of practical advice on how to find an agent, promoting your show and ordering musical arrangements.

The book's received high praise from industry insiders, including cabaret doyen Michael Feinstein who said, “The wisdom and knowledge contained in Gary's book is so valuable that I wish I'd had it when I was starting out as an entertainer! It's a marvellous achievement and could be your secret weapon.”

Author, David Ackert, said the book is a “career GPS for cabaret performers,” and Ruth Leons, Artistic Director for London's Crazy Coqs described it as, “The best guide ever written for the aspiring cabaret singer. Gary Williams’ generous sharing of his own secrets provides so much valuable information that it deserves to be read by anyone wanting a career in cabaret.”

>>Amazing advice from the best in the business.
Learn from cabaret stars like Michael Feinstein, Steve Ross, Marta Sanders and Marlena Shaw. They spill the beans on inside information like how they decide which songs to sing, how they script their shows and the lessons they've learned.

>>Practical advice you can use.
Cabaret Secrets is packed with sensible, practical advice. You'll learn what you need to know about writing a lighting cue sheet, making a PA specification and how to choose a recording studio. There are even tips on what to pack for a cruise ship gig!

>>Get the applause you deserve.
Cabaret Secrets takes you through every step of creating a show that people will want to see. Don't waste hours going around in circles. Just follow this guide and learn everything you need to know. It's like your own cabaret toolbox.

>>It's your direct line to the decision makers.
It can almost impossible to get a booker for a major venue on the phone but Cabaret Secrets includes answers from bookers to important questions like, “Exactly what does an artiste need to do to get work with you?”, “How can I make sure you'll watch my showreel”, “What kind of acts are cruise lines lining up to book?”

>>Make a special connection.
The key to cabaret is making a special personal connection with every member of your audience. Cabaret Secrets explains how.

>>Save years of effort.
We never stop learning but there are shortcuts. There's days there are few no cabaret schools and few places to go to for help. Don't learn from years of expensive mistakes. Cabaret Secrets gives you a fast track to success.

>>Save money.
In Cabaret Secrets you're getting advice worth £1000s. That's a fact. These tips could help you save £1000s on bad musical arrangements, £1000s on wasted publicity and £1000s recording CDs that sounded terrible. It is truly amazing value for money.

“Michael Bublé isn’t the only person keeping the Sinatra Flame alive,” so said the London Times of Gary Williams, star of the West End’s “Rat Pack” and soloist with leading big bands and concert orchestras including the Royal Liverpool Philharmonic, the Melbourne Symphony, the BBC Big Band, Ireland’s RTE and the Lahti Sinfonia Finland.

Other work includes performing for The Prince of Wales at Buckingham Palace, ‘That’s Entertainment’ a tribute to the MGM musicals with the John Wilson Orchestra at the Royal Festival Hall, performing at Sinatra’s Palm Springs home for the LA Jazz Institute, Radio 2 with the BBC Concert Orchestra, ‘Winter Wonderland’ at the Royal Albert Hall, ‘A Swingin’ Session’ with the Nelson Riddle Orchestra in Los Angeles, ‘Big Band Wonderland’ and 'Sinatra Jukebox' at Ronnie Scott’s, ‘The Legend of Sinatra’ (UK tour), a tribute to the music of Fred Astaire presented by his daughter Ava, BBC Pebble Mill, Gloria Hunniford’s ‘Open House’ (with Donny Osmond and Burt Bacharach), the soundtrack for the Warner Bros’ motion picture ‘Mrs Ratcliffe’s Revolution’ and BBC1’s ‘Doctor Who Christmas Special’. As a headline act on the world’s luxury cruise liners he has visited over 60 countries.

He is the author of Cabaret Secrets: 'How to create your own show, travel the world and get paid to do what you love', described by David Ackert as, “a career GPS for cabaret performers.”

This is book it’s a truly guide for new artists starting on the “cabaret show” business. Gary wrote the book in such a light way with many interesting and funny stories about his experiences, and important advices of professionals in the entertainment industry. I believe that all the artists must read this book before or going through a creation of a “cabaret show”.

You have subscribed to alerts for Gary Williams.

You have been added to Gary Williams's favorite list.

You can also sign-up to receive email notifications whenever Gary Williams releases a new book.