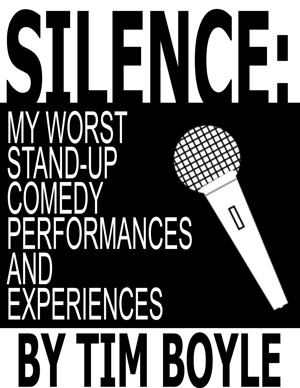 By Tim Boyle
Silence: My Worst Stand-Up Comedy Performances and Experiences chronicles Tim Boyle's most cringe worthy stories about the times when things in his comedy career didn't go as planned. Honest, mean-spirited, and sometimes embarrassingly sad, this collection of stories is about one man's failed attempt at bringing joy to the world through laughter. Who said the pain of others can’t be funny? More
Silence is said to be golden. When it comes to comedy though, silence can be deadly.

Tim Boyle began performing stand-up comedy when he was in high school. It didn't take more than a few seconds after entering a comedy club for the first time before realizing you need a thick skin to survive. Open mics, free bar shows, and New York City comedy clubs, Tim has failed on stage at them all. He’s been booed, banned, and had 200 high school kids throw gum at him.

With a unique world perspective, a head filled with strange opinions, and a dark sarcasm in everything he does Tim Boyle is must read. In the summer of 2012 he published his first book, a humorous fictional tale titled "Satan: Little League Superstar" about Satan joining a little league baseball team.

In November of 2012 he published his second book, a short diary based story about a man's outlandish battle with mother nature during Hurricane Sandy called "Surviving Sandy: A Battle Against That Deadly Whore Mother Nature."

So far in 2013 he has added to his collection "Silence: My Worst Stand-Up Comedy Performances and Experiences." Unlike the previous two published works, this is autobiographical. Tim recounts his days as a stand-up comedian and as the title suggests, he covers some of the most cringe worthy moments he during his stint in the business.

In addition to writing books, Tim Boyle is an aspiring screenwriter. Since 2011 he has been writing a [mostly] humor blog which can be found at http://mooselicker.wordpress.com

Stay tuned for more works from Tim Boyle in the coming months. 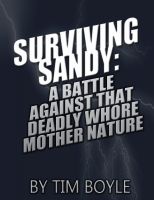 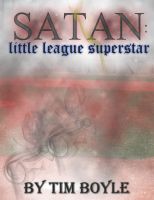 Reviews of Silence: My Worst Stand-Up Comedy Performances and Experiences by Tim Boyle

You have subscribed to alerts for Tim Boyle.

You have been added to Tim Boyle's favorite list.

You can also sign-up to receive email notifications whenever Tim Boyle releases a new book.