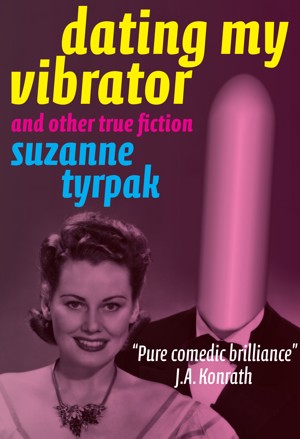 Suzanne Tyrpak ran away from New York a long time ago to live in Colorado. When she’s not writing or traveling, she enjoys riding her bike, swimming, skiing, and dancing. In her next life she would like to be a belly dancer or her cat.

Suzanne Tyrpak is a natural story teller, and I was cracking up out loud quite a lot during some of the collection. At the same time, though, the stories are also quite sad, and they're a great insight into the dating game after her divorce. I recognized quite a few traits of the men she dates, and they're pretty scary!

The first short story in the novel, Downhill, cracked me up, mainly because I have been in that situation myself. Tyrpak captured the situation and the feelings perfectly. Rock Bottom, the second story, was much sadder, and again,... I could relate. The next story, Not Nirvana, was both sad and extremely funny, once again perfectly capturing the conflicting emotions post-divorce. I didn't have a Dharma Dan in my life, but the story was absolutely hysterical, and more than a little creepy to know that these stories were based on real experiences! Dust of Souls was another heartwrenching story, but I felt it was a powerful one, perfectly depicting the loneliness that post-divorce life can bring. A Tiny Romance was one of the funniest, starring Sam, a post-divorce man who has sworn of women and romance. Double Date described every creepy, sketchy guy I dated, and made that particular story all too relatable! Phantom Library was definately different from the rest of the stories and I am not really sure I understood that one fully. It was very poetic and interesting to read, however. The final story in the collection was the titled story, Dating My Vibrator. This was my favorite in the collection, the one I most related to. Involving bad dates with a hypocritical guy who completely misrepresented himself, I came away from it shaking my head in sympathetic understanding!

All of the stories were very well-written and so relatable to anyone who has been through a divorce. I highly suggest reading this fun collection!

This book is one of those rare delights that have you both laughing and wanting to cry at the same time. The author has the ability to turn a paragraph on a dime - in one sentence revealing her inner anguish, and the next using her laser-sharp wit to prove we can laugh through the pain.
Honest, heartfelt, and well-written, this book allows us to share in the rollercoaster ride of emotions that accompany being suddenly single again. I highly recommend it.

You have subscribed to alerts for Suzanne Tyrpak.

You have been added to Suzanne Tyrpak's favorite list.

You can also sign-up to receive email notifications whenever Suzanne Tyrpak releases a new book.