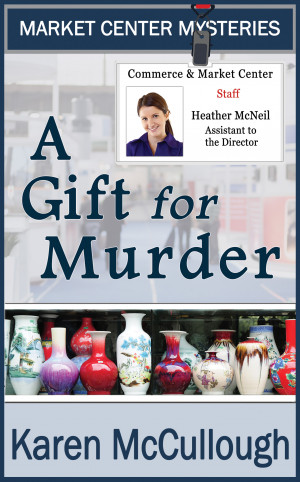 A Gift for Murder

By Karen McCullough
Rated 5.00/5 based on 1 review
The Gifts and Home Decoration trade show provides Heather McNeill with the longest week of her hectic life. As assistant to the director of Washington, D.C.'s, Market and Commerce center, she's point person for complaining exhibitors, missing shipments and miscellaneous disasters. It's a job she takes in stride—until murder crashes the event. More
For fifty-one weeks of the year, Heather McNeil loves her job as assistant to the director of the Washington DC Market Show Center. But the Gift and Home trade show, the biggest show of the year at the center, is a week-long nightmare. This year’s version is worse than usual. Misplaced shipments, feuding exhibitors, and malfunctioning popcorn machines are all in a day’s work. Finding the body of a murdered executive dumped in a trash bin during the show isn’t. The discovery tips Heather’s life into havoc.

The police have reason to suspect the victim’s wife killed him, but Heather doesn’t believe it. She’s gotten glimmers of an entirely different scenario and possible motive, but questioning exhibitors about the crime doesn’t make her popular with them or with her employers. Still, other lives might be at risk, and if she doesn’t identify the murderer before the show ends, the culprit could well remain free to kill again.
Her only help comes from a company executive with ulterior motives and the Market Center’s attractive new security officer, Scott Brandon. Despite opposition from some of the exhibitors, her employers, and the police, Heather seeks to expose the killer before the show ends. To solve the mystery she will have to risk what’s most important to her and be prepared to fight for answers, her job, and possibly her life.
Available ebook formats: epub mobi pdf rtf lrf pdb txt html
First 20% Sample: epub mobi (Kindle) lrf more Online Reader
pdb
Price: $0.99 USD
Buy Add to Library Give as a Gift
How gifting works
Create Widget
Tags: murder business cozy mystery exhibition mystery with romance mystery with humor gifts decorative accessories washington dc trade show
About Karen McCullough

About the Series: Market Center Mysteries

Heather McNeil loves working in the hectic world of trade show and conference management. As assistant to the director of the D.C. Commerce and Market Center, she spends most of her time being the liaison between the director and exhibitors. She takes a lot in stride, but even her cool is tested when murder crashes the event.

Reviews of A Gift for Murder by Karen McCullough

Commerce and chaos collide when a company executive is found dead in a dumpster during the huge Gifts and Decorations trade show. Murder? Most likely. The suspect? The victim’s wife. But Heather McNeil, assistant to the director of the Commerce & Market Show Center in D.C. (and the person who found the body), doesn't believe the beautiful trophy wife killed her less-than-faithful husband.

With nothing more than gut instinct to guide her, Heather moves into amateur sleuth mode as she gathers facts about the victim and the events leading up to his death. But trying to uncover the culprit and keep the investigation separate from her job proves tricky indeed. Help comes in the form of handsome security guard, Scott Brandon, who used to be a cop. Soon, though, not only is Heather’s job in jeopardy but her life and Scott’s life as well.

This is a fun, fast-paced read that takes you deep into the world of a trade show and the workings of a convention center. The list of suspects grows and then narrows. All the while, Heather manages the madness on the showroom floor, dealing with anything from an angel display gone awry to the smell of burnt popcorn from an overzealous promoter. Heather is smart and capable, and the rising respect and attraction she has for Scott adds fuel to the story. This is the first book in the Market Center Mysteries series by Karen McCullough, who proves that she clearly has a gift for mystery--and for murder!