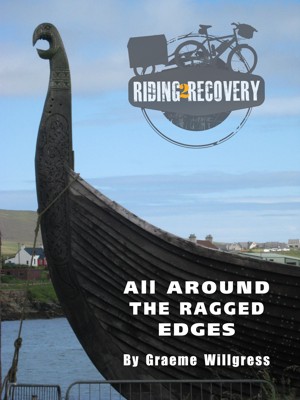 Riding2Recovery: All around the ragged edges

By Graeme Willgress
Rated 5.00/5 based on 1 reviews
The second book in the Riding2Recovery series follows the authors continuing battle to overcome poor mental health and raise awareness of mental health issues through ultra distance fundraising cycle tours.
His 2012 journey saw him riding from Lands End in the UK to the far north of the Shetland Isles via Irelands wild and rugged west coast and the Outer Hebrides. More
Having cycled unsupported around the entire UK coastline whilst managing poor mental health, and having written his first book documenting this journey,the author turned his attention to what would constitute the next step forwards in his recovery.

In deciding to cycle over 3500 kilometres from Lands End in the UK to the far north of the Shetland Isles, via Irelands wild and rugged west coast and the Outer Hebrides,the author had a new challenge that would provide that step.

The purpose of this trip would be to continue to raise awareness of the issues surrounding poor mental health whilst fundraising for the UK mental health charity MIND.

Had the author known that the UK was about to receive its worst summer on record he may not have ever set out. As it was he was left to battle the elements, his mind, and the physical stresses of such a major undertaking.

I've been many things in my life. A father, teacher, husband, climber, paraglider pilot, and a cyclist,to mention a few.
My adult life has been plagued with poor mental health, and when I broke down six years ago I was left in a wilderness of craters and debris.
The next three years saw the passing of my mother, father, and sister, adding to my despair.
With support from my doctor and therapist I survived each day and the emotional outbursts that ruled my life at that time.
After a chance meeting with some touring cyclists in Scotland I remembered how much I had enjoyed cycling in the past. On my return I purchased a cycle and, after a twenty year gap, began to ride again.
As I progressed, the idea of cycling around the UK coastline came to me. I wanted to talk openly about living with poor mental health, and I also wanted to do some fundraising for the UK charity Sustrans.
Since that small beginning, my life is slowly changing. I have now completed four long distance rides, raising awareness and reducing stigma of what it means to live with poor mental health. Riding2Recovery is a long term project that grows as I do.
I&#39;ve always loved the outdoors, and now it&#39;s helping me to live a different lifestyle, a life that is more sustainable.
Where my adventures will lead me is unknown, but I do know that I will meet many interesting people on the way and continue to write about them and the places I visit.
I hope my writing helps you enjoy those places as well. 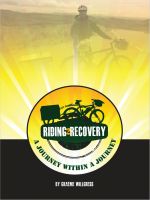 Review
Graham Thompson reviewed on May 3, 2013

This is certainly a book of two halves. One, the actual cycling is well documented and observed in both books. Graeme has a knack of seeing and describing places and scenes in a way that can range from seemingly harsh to sublime but always honest. Equally important to the reader, and more so to the author, is the reason for doing these rides.

Graeme has suffered severe mental health issues for some years and he has found that by planning and completing very demanding rides he his helping himself to come to terms with, and have some control over, his personal issues. To be candid and open about this in a cycling book, I believe, is very brave and courageous. But he takes it to another level in that he is using the rides not only for his own self help but to raise awareness and charitable funds for other people who have similar issues.

So, how does cycling from Lands End to the far north of the Shetland Isles via the rugged west coast of Ireland, across the Isles of Arran and the Outer Hebrides, around the north west coast of Scotland and out to the Shetlands via the Orkney Isles manage this?

Initially, it sets out to advertise why he is doing such a ride. By towing a trailer, named Trevor, emblazoned with logos of the charity 'Mind' and a synopsis of what he is doing, Graeme is able to not only raise donations but, importantly, to get people to engage with him and share their stories. He has a great skill in giving people the time, space and opportunity to talk about their problems. Something you may feel he could really do without, having enough of his own, but in reality both he and the person he engages with appear to gain some strength and comfort from knowing that they are not alone, that there are good people who understand where they are coming from. I found this to be very heartwarming and a constant source of admiration throughout the book.

The cycling side of it takes us through the wettest summer on record up the westerly coast of Ireland, not known for its droughts at any time, then across to Scotland and the Isles for a well described and breathtaking cycle tour. This is not about breaking records it is far more than that, it is about exploiting what all cyclist already know to work towards self healing.

Like anyone on a tour, he faces the weather, indeed lots of it in this book, hills headwinds and soggy camping places. At one point he even talks about giving in and returning home the going is so bad. I think I would have folded long before he even thought about it and, really, I would have had no excuse. But Graeme didn't. Conquering his demons is what this ride is all about and he fights back with great courage and clearly wins the day.

I would recommend that if you have not read his first book, 'Riding2Recovery a journey within a journey',  that you get it and read it first. There are two reasons for this. One, simply because it is a good book and a good read but it also sets a lot of the background to why Graeme does these rides. Secondly, it will help when you read this second book to see that what he is doing is working.

Both his books stand out from the crowd to me simply because a very sensitive and stigmatised problem is being dealt with in such a different and positive way. There is no way these books are somber or depressing, on the contrary, they are touching, uplifting and truly inspiring.

I have had a veritable feast of 'food for thought' in reading these and I truly admire what Graeme has done and continues to do.

You have subscribed to alerts for Graeme Willgress.

You have been added to Graeme Willgress's favorite list.

You can also sign-up to receive email notifications whenever Graeme Willgress releases a new book.