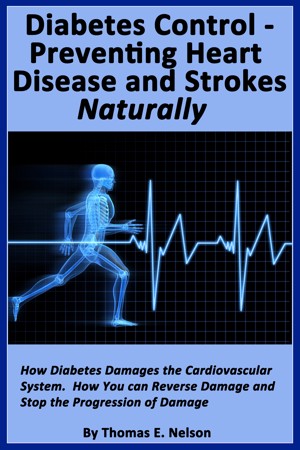 By Thomas Nelson
Nearly 9 out of 10 diabetics die of a heart attack or stroke (85%). Diabetes is a very complex disease that progresses over time causing many very dangerous complications.
This book teaches you how to remove the plaque from your arteries, change your lifestyle and diet, and prevent you from becoming one of those that die from heart disease or stroke. More
The book "Diabetes Control- Preventing Heart Disease and Strokes Naturally" is a complete guide for diabetics that explains how the cardiovascular system works, how diabetes impacts the heart and vascular system, how you can repair some of the damage, increase circulation, and how to remove plaque from the arteries.
Learn why diabetics are prone to silent heart attacks, and why diabetics are more prone to the formation of blood clots, and how to fix it.
Learn which foods are heart healthy,and how to use exercise to lower blood pressure and strengthen the heart muscle and lungs.
Learn how the body produces and controls cholesterol, and how you can help your body control cholesterol.
Taking your name off of the list of the 85% of diabetics that will die of heart disease or stroke is easy, once you know how.
Download: epub mobi (Kindle) pdf more Online Reader
rtf lrf pdb txt
Price: Free! USD
Add to Library
Create Widget
Tags: diabetes heart attack heart disease strokes pad blood pressure plaque cardiovascular disease blood clots diabetes heart attack diabetes heart disease silent heart attack arterial plaque artery plaque diabetes and cholesterol diabetes and silent heart attack diabetes cardiovascular disease diabetes pad diabetes strokes diabetic blood clots diabetic blood pressure diabetic cholesterol diabetic heart attack diabetic heart disease diabetic stroke heart disease and diabetes metabolic enzymes plaque removal preventing diabetic heart disease preventing diabetic strokes preventing heart attacks preventing strokes removing arterial plaque removing artery plaque removing plaque
About Thomas Nelson

Thomas Nelson was diagnosed type II in 1996. He became frustrated with the lack of information provided by his doctors; so he began researching diabetes and has been conducting research on diabetes ever since. After realizing how valuable his research would be to other diabetics he began publishing his findings. He has published over 50 articles on diabetes, written 12 books on diabetes; his first was published March 2011-Diabetic’s Handbook 853 pages.
Thomas devotes most of his time to helping diabetics. He volunteers as an instructor for courses on diabetes in his community. He conducts free diabetes courses via email, and he serves as a volunteer administrator on two diabetes forums. Doctors in his community hand out copies of his writing to their diabetic patients. He has helped many diabetes educators learn about the proper use of glycemic index and understand other important self-treatment topics. He is considered by many to be an expert on diabetes. He has helped thousands of diabetics gain control over their disease and stop the progression of diabetes.
Thomas lives in Central Florida with his wife and family. He has three degrees, AAS Mechanical Engineering, Bachelor of Science-Business Administration-Magna Cum-Laude, and an MBA-Business Administration

You have subscribed to Smashwords Alerts new release notifications for Thomas Nelson.

You have been added to Thomas Nelson's favorite list.

You can also sign-up to receive email notifications whenever Thomas Nelson releases a new book.