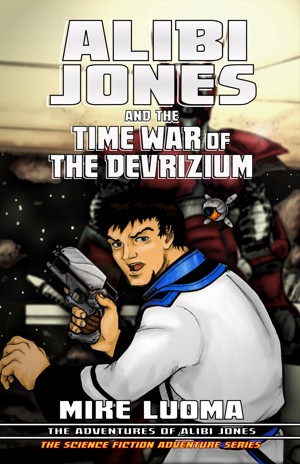 Alibi Jones and the Time War of The Devrizium

By Mike Luoma
A race of time travelers wants Alibi Jones' time to come to an end in this connected Cycle of Short Stories.

This anthology grew from Mike's audio adaptations of his comic book scripts. Now rendered in prose, Alibi Jones fans who might not read comics have a chance to experience these adventures with the xenophobic, time traveling race known as The Devrizium. With 2 new, unreleased tales! More
A race of time travelers seems to want Alibi Jones' time to come to an end in this connected Cycle of Short Stories.

"Alibi Jones and The Time War of The Devrizium" tells some of the same stories you'll find in Alibi Jones' comic books, now rendered in prose. The collection also features two brand new, exclusive stories! This anthology gives Alibi Jones fans who might not read comic books a chance to experience Alibi's adventures with the xenophobic, time traveling race known as The Devrizium!

Mike Luoma writes science fiction, among many other things, somewhere off in the wilds of Northern Vermont. The Star Seeds of Earth is his newest, the fourth novel and sixth book in The Adventures of Alibi Jones, which followed The Vatican Assassin Trilogy. Mike also creates comics with artists from around the world, including issues of The Adventures of Alibi Jones and a graphic novel adaptation of the novel Vatican Assassin. Mike narrates his books week-by-week on his free, long-running Glow-in-the-Dark Radio podcast, and is also the narrator for each of his widely available audiobooks. You can find his audiobooks, narrated by Mike, wherever fine audiobooks are sold. Mike's paperbacks and eBooks are also available at every online retailer.

About the Series: The Adventures of Alibi Jones

As humankind expands out into the stars and encounters already well-established alien races and cultures, Alibi Jones gets into and out of trouble as a Mediator for the Solar Alliance in the 2130's in this ongoing science fiction adventure series.

Also in Series: The Adventures of Alibi Jones

You have subscribed to Smashwords Alerts new release notifications for Mike Luoma.

You have been added to Mike Luoma's favorite list.

You can also sign-up to receive email notifications whenever Mike Luoma releases a new book.