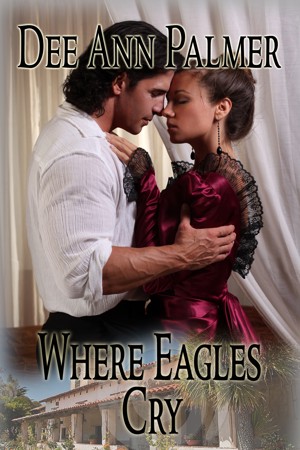 By Dee Ann Palmer
Until the ship sails for Boston months away, Cara is trapped in the midst of danger and an impossible love in the wilds of Mexico's California. When the bells ring again and an eagle cries, will she be the next to die? More
Jilted by love, in 1834 Cara Lindsay flees Boston to begin a new life with an aunt in Mexico's rugged California. Heartbroken to learn her aunt is died, she becomes companion to Desira, wife of Don Miguel Navarro, the tough and irresistible owner of a major inland rancho.

Prior to her arrival, Desira suffered a permanent brain injury in a mysterious fall and will never be more than a child. The lonely ranchero's heart opens to Cara's kindness and beauty like parched earth to rain. Cara is drawn to him as well. Yet her heart may break again, for she would never be any man's mistress.

Dee Ann Palmer's love of language and words began as a small child while listening to her mother practice as a member of the Texas Storytellers Association. Later, the King James language of the Bible and Shakespeare's works increased her fascination. She penned her first stories at the age of eight. Now an award-winning, multi-published author in fiction and non-fiction, her focus in recent years has been on tales of romance, murder and suspense. "Where Eagles Cry" was her first publication as an independent author.

Palmer is a member of the Published Author Network of Romance Writers of America (RWA-PAN) and Sisters in Crime.

She's married to her college sweetheart, and until her death in April 2015, they lived in southern California with Ella, a dark tortoiseshell older cat they adored. "We miss her so much!"

Reviews of Where Eagles Cry by Dee Ann Palmer

You have subscribed to alerts for Dee Ann Palmer.

You have been added to Dee Ann Palmer's favorite list.

You can also sign-up to receive email notifications whenever Dee Ann Palmer releases a new book.