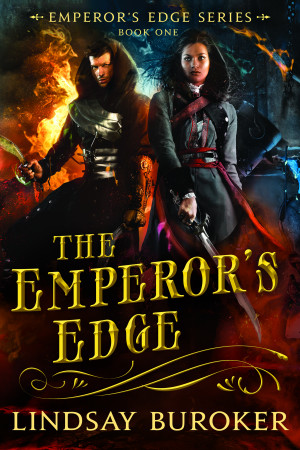 Worse, Sicarius, the empire's most notorious assassin is in town. He's tied in with the chaos somehow, but Amaranthe would be a fool to cross his path. Unfortunately, her superiors order her to hunt him down. Either they have an unprecedented belief in her skills... or someone wants her dead.
Download: epub mobi (Kindle) pdf more Online Reader
lrf pdb txt
Price: Free! USD
Add to Library
Create Widget
Tags: urban fantasy fantasy steampunk epic fantasy high fantasy swords and sorcery swords sorcery fantasy mystery fantasy and science fiction traditional fantasy steampunk fantasy fantasy action
About Lindsay Buroker

Reviews of The Emperor's Edge by Lindsay Buroker

The more books I read of Linday Buroker, the more I love this author. Her writing style is engaging and fluent and she creates some great characters.

I loved Amaranthe, Sicarius (which I misread as Siracuse the first time and now this name is stuck in my head) and their rag-tag group. This book is an easy to read adventerous story and I'm really looking forward to read the rest of this series and the other series in the same world.

There is nothing new in this book it has all been written before and the story fails to draw the reader in. Halfway through the book the ending is all to clear to the reader. So why read on. Amanthe the woman enforcer is portrayed as a strong woman but ends up in prison three times and escapes each time. I found the dialouge annoying with its toing a throwing. It done nothing to enhance the key characters.

This book wasn't what I expected,having read others in the series before, but even though there wasn't any space action, it still was good enough to keep my attention focused for the whole book. I don't know if I'll actively search out other books in this series, but if I do run across them, I certainly won't mind reading them. it might be interesting to see what happens to the whole crew, and how they fit into the rest of the universe.

This is the first in a series, the others of which aren't free but if they are as entertaining as this they are probably worth the price. This is the second by this author I've come across and I'm convinced that she's as good as all but the very top of the paid sci-fi market, especially today. This is similar to the other I read, 'Balanced on the Blade's Edge' in that it takes place on a planet in the steam age where there is magic but in a society that does not use magic and where it is a capital offense to do so. This is not the same location as the other, but could very well be on the same planet, which could be Earth because it's all Earth based life, or could be one which was colonized and terraformed by Earth folk in the past. Also like the other, this story takes place in the cold and snow.

The plot is about a plan to subdue and/or assassinate the Emperor of the nation where this takes place and put a more compliant person on the throne, one who will not be trying to give the common people a fair deal and even bring about democracy. The plotters all know that democracy is impossible as long as there is greed, alpha males and testosterone in the world. Our own problems in 2020 may be proving them right, we'll see how it plays out but democracies are failing the world over at this time. The main characters are a policewoman who uncovers the plot, a deadly assassin who has worked for one of the conspirators and the young and idealistic emperor himself. There are several others that she recruits to help her defeat the conspiracy that are also quite realistic. In this story, as in the other, the 'bad guys' are a little stereotypical and unremittingly evil, like the satan-spawn who attempted to destroy our democracy recently.

The other characters in the story are often just cannon fodder. If there was less violence I would have given this four stars but there are hundreds dead both from interpersonal violence and attacks by a magical monster. Some of the scenes are pretty gory, not as bad as some others I've come across but more than I personally like to read. Also the story isn't violence for the sake of violence like in 'Chasing the Jeweled Throne' or 'The Psychian Chronicles' for instance. Unlike those, the violence here is used to heighten the tension in the suspense. There is one major twist in the story but unfortunately there were too many clues that it was coming so the reaction when it happens is more like 'finally!' instead of 'WHAT!?'

Unlike 'Balanced on the Blade's Edge,' there isn't much sex in this story. The main character notices some feelings and one of the guys she recruits thinks he's God's gift to women but nothing actually happens. The prose and proofreading are excellent, professional grade thruout. I noticed only one case of two words being repeated. This story had a couple passages that might be construed as a message, the line about democracy being impossible, and the observation that extreme wealth is never enough and in fact only seems to breed more greed. Neither of these is really developed and I'm recommending this only for its entertainment value.

A friend raved about it so I downloaded my own copy because I wanted to read it and see what the fuss was all about. I was hooked!

Update:
I have purchased the series before I realized the first three were free as a trilogy and they were so good that I have NO regrets for paying for the books 2 and 3! Lindsay is generous in her book lengths, her books, and every other aspect of her novels as far as I can tell. For this reason among others, she has earned a loyal follower in her career. I have paid for triologys that I couldn't make it through the first novel. This one that is being given away, I couldn't put down! Other novels are short and don't give you the feeling that you got what you paid for. This series of novels are what us old folks consider 'Gettin yer money's worth' and more. Her characters are well fleshed out and very enjoyable to get to know. Her character building take priority over world building but neither lack in scope or detail. Her humor and creativity is top notch. Her characters are well fleshed out and they have a great character arch that I enjoyed. These are the type of people you want to read more and more about. I have yet to read her other series but so far this aurthor is HIGHLY RECOMMENDED.
JT

(review of free book)
Victarr reviewed on Dec. 21, 2018
(no rating)
AWESOME! Lindsay gives us an entire novel right off the bat to showcase her writing abilities, and are they good! Her characters are endearing, her humor is excellent, her story line is intriguing, and her book just suck you in and entertain you till the very last page! Too many authors only give you a chapter to judge their work. I like that Lindsay is willing to give us a fair example and because of this she has made me a great fan.
JT

A thoroughly enjoyable book, well written and keeps moving with twists and turns to the plot .

Wow! A very nice book. And the best thing about it is, it's FREE! Thank you!

This book was really good, in fact good doesn't do it justice it was incredible. I loved this book, infact I have read it no less then three times. If you don't believe me then read it for yourselves. It FREE so read it today!!!

You have subscribed to Smashwords Alerts new release notifications for Lindsay Buroker.