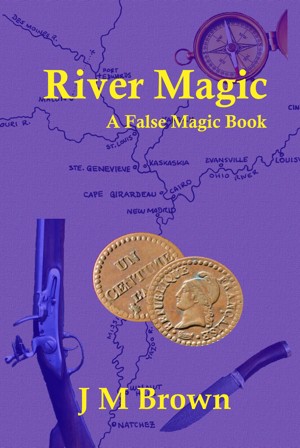 By J M Brown
Rated 4.25/5 based on 8 reviews
Aimee and Brenda, fourteen-year-old orphans, meet in an alternate history version of St. Louis, Missouri Territory in 1822.

While seeking a lost letter, the girls get swept up in a conspiracy against the alliance between the United States and the Iroquois Confederacy.

In this alternate history, slavery was abolished with the ratification of the U. S. Constitution in 1791. The Iroquois and Cherokee nations fought on the side of the colonies during the revolution and have retained their independence and formed an alliance with the United States against the western savages and the great powers of Europe.

While seeking a lost letter, the girls become involved in a conspiracy against the alliance.

Born a Scorpio, but now a Sagittarius, the author is skeptical of, but fascinated by, the paranormal.

I am as old as my tongue and a little older than my teeth.

I despise education, but love learning. I read a book once.

I have touched an elephant, ridden a camel, eaten a rat, been held hostage in the jungles of Guatemala and I may have heard the eastern colossus of Memnon sing. The world is far too big for me to see it all, and that makes me sad.

I have known true love.

I am the proud owner of a beautiful Smith-Corona typewriter on which not a single work of fiction has been typed. I now pound away on a clickity-clackity-sounding modern computer keyboard, but sorely miss the soft music of mechanical hammers striking the paper-covered platen.

As a writer of fiction, I am a professional liar, but everything I say is true.

This is a great history book about what could have been. History is done, however it affects everything we do as citizens of America. What if? The author did a great job of making history interesting and I could not wait to read the end to see how the states could have turned out. I also liked that this story took place in Missouri because it did not change any major history (like Plymoth Rock, or Boston Tea Party). The Western Plains however did get changed. I have often wondered about the Indians and how history books would be different if they were the authors. This is a fun summer read that will leave you saying what if?
I am giving this book a 5/5. I was given a copy to review, however all opinions are my own.

(reviewed 54 days after purchase)
vicky Deal Sharing Aunt reviewed on Sep. 21, 2013
(no rating)
This is a great history book about what could have been. History is done, however it affects everything we do as citizens of America. What if? The author did a great job of making history interesting and I could not wait to read the end to see how the states could have turned out. I also liked that this story took place in Missouri because it did not change any major history (like Plymoth Rock, or Boston Tea Party). The Western Plains however did get changed. I have often wondered about the Indians and how history books would be different if they were the authors. This is a fun summer read that will leave you saying what if?
I am giving this book a 5/5. I was given a copy to review, however all opinions are my own.

I’m not entirely sure what to classify this book.

And I’m not entirely sure how to share my feelings on this book.

The book was long and drawn out, but not in a bad way.

It was a good read. Enjoyable. But it was really long and nothing of pure interest got my attention until the end. Literally, the last 4-5 pages of the end.

That is where I got hooked and will be grabbing the next book to see how it continues.

There wasn’t drama, action, suspense. It just was. It was a story of two girls. It was a good story about two girls, but not with a lot of the normal book “stuff”.

It is something I would read again and as I mentioned, I will be picking up the next book (False Magic) to see what happens in the continuation because I have grown to care for these two girls.

Overall, because I did like the story and I did become attached to the girls and because I am dying to know what happens, I give this book a 3.5-4 rating out of 5.

When I first received this book to read, I was a little hesitant. I typically love the historical fiction genre, but I was a little caught off guard with some changes to history. That being said, I kept reading the book, and I was pleasantly surprised at how much I really enjoyed the story of Aimee and Brenda, two teenage orphans that got caught up in something much larger than they could have predicted. I enjoyed the quick-moving nature of the book as well as the changes in perspectives as the narrative changed from one character to the next. I did find that the two main characters were written very similarly at first, and it was hard to distinguish (and remember) which was which, but it got easier as I got to know their personalities a bit more in the book. This book is a part of a larger series, but it is not necessary to read all of them to understand what happens in this one book. Overall, it is a great and intriguing read, and I would recommend it to many readers.

Okay for those of you that know nothing of this book it is part of a series called "A False Magic". I am not sure if this books storyline has anything to do with the storyline of the other books but I had no issues understanding what was going on without reading the other books. With that being said "River Magic" is a story following the life's of two young women named Brenda and Aimee in history, but this is not the version of history that we learned about in school. In this version slavery became illegal after the validation of the constitution. The girls are hired by a mysterious man who asks them to become messengers. While carrying these top-secret messages they run into trouble occasionally. I actually really liked this book. I have always found history interesting but with most young adult novels written on history they are either entangled with a love story or are poorly written. This book on the other hand was neither of those things. I thought it was very well written and rather enjoyed it. I would highly recommend this book.

This tells the magical journey of two 14 year old orphan girls in an alternate 1822. Thier adventure begins when they are hired by the mysterious Mr.Wilson.

JM Brown writes with a delightful skill that causes this story to maintain intelligence while still being a quick read. Each page has new adventures that will make the reader want to keep going and not put it down.
Truely a talented author.

I would love to read more and highly recommend this novel.

I received one or more of the products mentioned above for free using Tomoson.com. Regardless, I only recommend products or services I use personally and believe will be good for my readers.

I received a copy of the eBook River Magic by J.M. Brown. This is a young adult novel that is part of the False Magic book series. Despite being part of a series, this novel stands on its own just fine. There are excerpts of other books in the series at the end, and they sound just as intriguing as this book was itself.

What sets this book apart is its setting in an altered history. As noted in the book's description, "slavery has been abolished in the United States shortly after the ratification of the Constitution in 1789. The Iroquois Nations fought on the side of the United States instead of the British during the revolution, and the Iroquois have maintained their independence and formed a strong alliance with the United States against the Indians of the western plains and the great powers of Europe who seek to reclaim North America."

The story centers around two young teenage girls, Aimee and Brenda, who are recruited to act as messengers headquartered in St. Louis, Missouri. They travel along the river, carrying and delivering top-secret messages and occasionally running into a bout of trouble. Spoiler alert: while the tale ends in apparent tragedy, one of the excerpts alludes to happier endings.

I found this book to be an easy read with a captivating storyline. While I found the re-imagined history to be somewhat confusing and unnecessary, it played a role in shaping the plot of the novel - honestly, history's never been my forte anyway! ;-)

I received one or more of the products mentioned above for free using Tomoson.com. Regardless, I only recommend products or services I use personally and believe will be good for my readers.

(reviewed 17 days after purchase)
Linda Skinner reviewed on Aug. 3, 2013
(no rating)
What an entertaining book. I was captivated with the characters. I must be a very big young adult because this is the type of book that I like. Two orphan pre-teens are making it on their own as scavengers and thieves until they meet the mysterious Mr. Wilson and he becomes their benefactor. The condition is they travel together as friends where color has no barrier. That is because in this altered history slavery is abolished early after the Revolutionary War. This book and author have the distinction of being the Winner of Best Young Adult Novel of 2012 by Maryland Writers' Association. It rightly deserves the title. JM Brown weaves a tale of mystery and suspense and a smidgen of rivalry between the girls. It has old world charm and chivalry. There is a neighborly graciousness and then there are the bad guys.

River Magic is a story about the journey of two orphan girls, Aimee and Brenda. I wasn’t able to read the first book and so at first I thought that the novel was about supernatural magic. I later learned that the magic in the story is the journey itself. This is quite a new thing for me since I’m not really that fond of historical fiction. When I think of historical fiction I always get the feeling that it would be boring and not really exciting. This novel proved everything I knew of historical fiction to be wrong. I was not bored. In fact, I was intrigued by how two girls their age would manage to survive on their own.

(reviewed 17 days after purchase)
monica gritman reviewed on July 24, 2013
(no rating)
Although this book was written for younger
readers, I found it to be a great read. The story really
captivated me. I could not stop reading till I was
finished reading. Even my kids loved the book so
much they couldn't stop reading either .

You have subscribed to alerts for J M Brown.

You have been added to J M Brown's favorite list.

You can also sign-up to receive email notifications whenever J M Brown releases a new book.