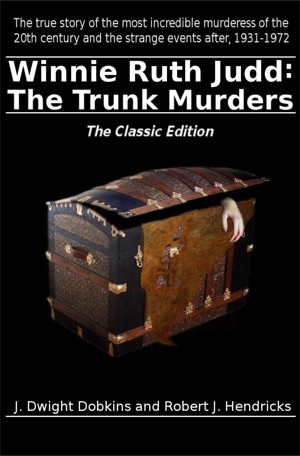 By J. Dwight Dobkins
During the Great Depression in 1930's America there were two "trials of the century" that captured the attention of the world: the Lindbergh baby murder trial, and the Winnie Ruth Judd "Trunk Murders" trial. This e-book edition marks the 41st anniversary of release of the original Winnie Ruth Judd: The Trunk Murders, the first book published about the sensational Judd murder and sanity trials. More
The original 1973 edition of this book was published by Grosset & Dunlap, and enjoyed an 18-month run in Doubleday’s Bargain Book Club. It was nominated for Crime Book of the Year, and over the years has been optioned six times as a possible film.

Of major note, that 1973 edition was the first book published about the infamous Winnie Ruth Judd “Trunk Murders” case. That book spawned other books, stage dramas, and even a puppet movie. Yet it still is considered by many true crime fans as the most authoritative book written about the lightly-built woman who gained worldwide notoriety as the “Tiger Woman” for the alleged ferocity of the so-called “Trunk Murders.”

Her sensational murder trial and even more sensational sanity trial focused the eyes of the world on Phoenix and small-town Florence, Arizona. Her seven escapes from the Arizona State Hospital for the Insane in Phoenix repeatedly brought focus back to Mrs. Judd. She had several timely stays of execution that kept her from being hanged, and the many bizarre twists and turns in her trials and hearings remain classic in the annals of murder trials in U.S. history.

In one very unique hearing the State put her on the stand as a witness against the man alleged to have had intimate relations with Mrs. Judd and both of the women she claimed she had killed in self-defense. Contrary to popular opinion even to this day, she was charged with only one murder, and that was not of the victim whose body was dismembered.

In putting Winnie Ruth Judd on that witness stand she had opportunity to tell her self-defense story. The judge bought it, and ruled that as there had been no crime of murder there could not have been an accomplice to murder. As such, charges were dropped against the man. That was a most unexpected ironic twist. Even more ironic was that Winnie was immediately set to face execution on another date.

Here are samples of what others said about that 1973 Grosset & Dunlap edition:

“Most grisly crime of the century.”—San Francisco Chronicle

“...the authors have turned her bizarre legal case into an
engrossing story.”—Atlanta Journal Constitution

“Their book is a job well done in newspaper
reporter style.”—Oklahoma City Oklahoman

And here is how famed Phoenix, Arizona attorney
John Flynn summed up the case in a book review in
The Arizona Republic

J. Dwight Dobkins has written eleven books, but with the book he co-wrote with Robert J. Hendricks, he used the formal J. Dwight Dobkins. Om all of Dbkins' other books he has used the informal Jim Dobkins.

You have subscribed to alerts for J. Dwight Dobkins.

You have been added to J. Dwight Dobkins's favorite list.

You can also sign-up to receive email notifications whenever J. Dwight Dobkins releases a new book.