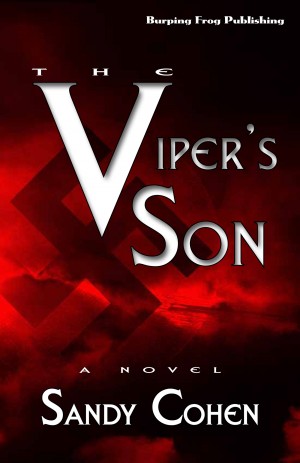 By Sandy Cohen
In the closing days of World War II, the Nazi high command has trained for a secret mission of sabotage along the eastern shores of Florida by burying explosives on the beaches to prepare for the inevitable defeat of the Reich and their ultimate revenge. Combined with modern international land fraud and betrayal of the most sacred trusts of all, and the fuse is lit.
Available ebook formats: epub pdf rtf lrf pdb txt html
First 20% Sample: epub lrf pdb Online Reader
Price: $3.95 USD
Buy Add to Library Give as a Gift
How gifting works
Create Widget
Tags: fiction world war ii mystery espionage nazi spy
About Sandy Cohen

Sandy Cohen’s published works include three books stories, articles, poetry, and essays in journals and magazines in the United States, Canada, China, Germany, England, and Greece. His work, critical and creative, has drawn praise from, among others, Norman Mailer, Bernard Malamud, Patrick White and Isaac Beshevis Singer. He has been a professor, jazz musician, bookbinder, actor and, for almost two decades, a humorous commentator on public radio. He appeared in his own mini-series for public television and in a feature film, Do Not Disturb, filmed in northern China, where he lived for a year. He currently resides in southwest Florida with his nearly-perfect family.

Reviews of The Viper's Son by Sandy Cohen

You have subscribed to alerts for Sandy Cohen.

You have been added to Sandy Cohen's favorite list.

You can also sign-up to receive email notifications whenever Sandy Cohen releases a new book.