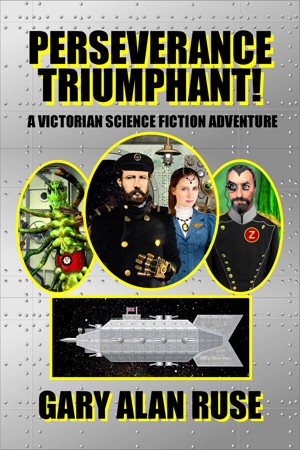 By Gary Alan Ruse
Rated 5.00/5 based on 2 reviews
An epic Steampunk adventure.

In 1880 the captain and crew of a steam-powered British starship must battle a deliciously despicable villain, rescue the kidnapped Queen of England and thwart an alien invasion from outer space. Can Star Captain Demetrius Cogswell, Ship's Telepath Lady Elidora Thistle and the crew of the HMS Perseverance save England, Earth and the rest of the solar system? More
An epic Steampunk adventure. (Victorian Science Fiction..)

In 1880 the captain and crew of a steam-powered British starship must battle a deliciously despicable villain, rescue the kidnapped Queen of England and thwart an alien invasion from outer space. Can Star Captain Demetrius Cogswell,
Ship's Telepath Lady Elidora Thistle and the crew of the HMS Perseverance save England, Earth and the rest of the solar system?

Gary Alan Ruse is the author of Houndstooth, A Game of Titans, The Gods of Cerus Major, Morlac: The Quest of the Green Magician, The Cross of St. Anne, Murder in Deer Park, Aggie & Agent X and other works.

Perseverance Triumphant! begins with 86-year-old Nikola Tesla's scientific breakthrough: time travel. After he activates the device, the reader is shifted to Victorian London -- not as it was, but after Tesla's intervention. There we meet Demetrius Cogswell, starship captain of the Royal Stellar Fleet in the year 1880. Along with Lady Elidora Thistle, an Esper Agent, Captain Cogswell discovers Queen Victoria is in great danger. Can Baron Zeigfried Von Zoltoff be involved?

This is an imaginative adventure filled with gadgets and cinematic action. Gary Alan Ruse's writing is crisp and clear, bringing glorious Steampunk vistas to life. A great story from a true fan of the Steampunk genre.

In Ruse’s world, as in the real Victorian world, steam power is the basis of everything, but he has carried it to almost lunatic levels – The mind boggles slightly at the idea of a space ship that relies on steam for all its power, but why not?

A very enjoyable and memorable book.

Anyhow, this story, which I read at one sitting as I found it both griping and totally enjoyable – if remarkably silly – is all about how our universe is about to be invaded by horrible aggressive aliens from another universe, with the help of a number of Earthlings who have been recruited to help this invasion by the promise of being given total power on earth – foolish individuals.

As befits a book that is not entirely serious (!) set in Victorian Britain, all our heroes are amazingly correct, patriotic and upright (and emotionally crippled too, of course) and the villains are absolute cads, personified in the chief villain, a certain Baron Siegfried von Zoltoff, who speaks as all good German villains should with no end of “v”s and “z”s and who is totally bad.

So the main point of the story is the attempt on the part of our heroes – a motley collection of robots powered and controlled by fuzzy orange caterpillars (OK, I told you it was a strange and silly story didn’t I?) a love lorn telepathic woman and the subject of her love, a British (and how very British too) captain, the captain of an extremely Victorian sort of space ship – to rescue queen Victoria who has been kidnapped and whisked off to Mars (in passing Ruse allows Victoria to actually say the following “About bloody time“ which somehow I rather doubt the real Victoria would ever have said….

I shan’t describe the story any further, as I want you to go and buy this wonderful story for yourselves, and don’t want to give away too much of the story line here.

Ruse has managed to create a very believable (well once you get into it at least) sort of high tech Victorian world, full of brass levers, gauges, puffing steam engines, evil villains,very heroic heroes extraordinary weapons all of which rely on steam to give them the energy they need to work, all mixed with loads of 21st. Century technology and a truly Steam Punk feel to it all.

What on earth is Steam Punk?

Steam Punk means anything that sort of mixes Victorian steam powered things, lots of gear wheels, valves, chains,cast iron parts and totally 21st Century technology – Thus in the world of Steam Punk, a computer can exist happily enough, except that unlike the real ones, these ones would work with steam power and loads of valves and levers. I once wrote a post about a Steam Punk ereader (link) which pretty well typifies the idea.

A most enjoyable read for anyone.

Anyhow, this is an ebook that is great fun to read, would amuse just about anyone of any age I would think, well perhaps not a child under about 8 years of age, but anyone else should enjoy this story, which somehow I suspect may well be the first of a series of similar tales involving the same cast of heroes and villains, at least I hope so.

Also a website for this ebook.
Steam Punk Adventures in Space – Great Fun

Gary Ruse, A most prolific and varied author has done it again. This time he has ventured into the curious world of “Steam Punk” with his latest ebook. With the wonderful title of “Perseverance Triumphant!” he takes us into a Victorian world which has developed space flight (among other technical marvels) owing to a box of papers that Nikolai Tesla sent back in time – the ins and outs of why he did that I shan’t discuss here, you will have to read the book yourself to discover that important information.

For the fun of it, Ruse has also set up a website hosted by the good Baron Siegfried von Zoltoff, in which we are introduced via a series of very Victorian portraits to all the main characters in the book. I particularly enjoyed what happens when you pass your mouse over the Teddy Bear…….