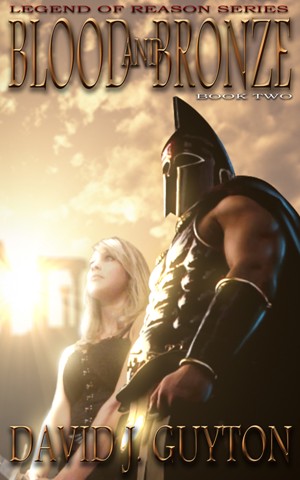 By David J Guyton
Rated 4.67/5 based on 3 reviews
The doom of the western world is on the horizon. Hope that was promised has turned to dust, and the violent storms of rebellion begin. Beings from hidden realms demand their freedom, or threaten all of mankind with their legions of the dead.

Will Medora fall to shadow and flame? Or can our heroes bring the light of freedom to the fallen realms?

I am an author and artist living in the eastern United States.

My work is fantasy, but it is an allegory for the modern political struggles in the United States.

Also in Series: Legend of Reason

Review
Thinker reviewed on March 15, 2013
(no rating)
I just finished Mighty Hammer Down. I loved the philosophy. The characters are well rounded, beautifully defined. The description of the weapons, the war etc are outstanding. I am glad that I discovered this writer! It is a 'must read'.
If I mispelled any words, forgive me. I am very tired and have not been well. Just turned 71 years in February and usually I am very active. Gym 3 hrs three times per week lifting weights, cardio etc. Just wanted you to know, age does not define what one reads. Like I said, this book is great; in the past I used to read books like Cancer Ward by A. Solzhenitsyn, or Plato or E.A. Poe. Thank you. Thinker

(reviewed the day of purchase)
Chris Webb reviewed on July 28, 2012
(no rating)
Thoroughly enjoyed the book. It is often hard for writers to get the military aspects correct but David Guyton has done a credible job maintaining accuracy of the capabilities of the weapons, armor and tactics. Looking forward to the next book.

(reviewed 22 days after purchase)
Randi Coffey reviewed on April 7, 2012
(no rating)
This book and every last other one in the Legend of Reason series are just incredible. The constant battles and struggles that theall of the amazing characters face are almost identical to those we fight. The very deep and emotional exchanges they have in conversation seem to be based on the same basis of a lot of conversations I've had. The relationship to our current economies struggle and to the trials faced by the Medorians also seem to be extremely similar. At least I've seen the different political beliefs within these novels. Blood and Bronze is truly an awestriking novel and should be on every person in the countrys book shelf. It follows as an incredibly ornate, great, greek and roman type of fantasy. I fell head over heals for this book and all the other novels in the series. I am a wery critical reader, but after reading Blood and Bronze, I felt there was no comparison. I felt mystified and drawn in. I read this novel and the other two novels in the series in less than a two week period. I would like to thank the author Mr. David I Guyton for such an extremely well balanced book with a mix of fantasy and mystery,a needed novel in entertainment.
Randi Coffey

(reviewed the day of purchase)
joseph eatman reviewed on Feb. 8, 2012
(no rating)
This book and the others in the legend of reasons series are amazing. The everyday struggles that the characters face mimic those of our own. The very deep and philosophical exchanges they have in conversation seem to be based on the same primus of a lot of conversations I've had with friends in the past. The relation to our current economic situation and to the trials faced by the Medorian people also seem to be closely related. At least I see different political variables within these novals. Blood and Bronze is truely a phanominal noval and should be on every ones top read list. It follows suit as a fantastically great, greek-roman fantasy. I absolutely fell in love with this book and the others in the series. I am not a reader or a strong one at that, but after reading Blood and Bronze. I found myself so intregued and drawn in. I read this noval and the other two novals in the series in less than a months time. If that isn't a testimony of how great these books are then call me and I will personally tell you how great these books are. I would like to thank the author Mr. Guyton for such a wounderful contribution to our society. With many anticipating reguards for your forth noval, Jöseph Eàtmàn

Good book losely based on Greek Mythology:- Arias (Ares or Mars as romans called him)

(reviewed the day of purchase)
Golden Emperor reviewed on Nov. 1, 2011
(no rating)
A really good book losely based on greek mythology Arias (Ares? God of War or Mars as Romans called him)

(reviewed the day of purchase)
brody mullikin reviewed on July 6, 2011
(no rating)
in the middle of the book and i cant stop this book is amazing i love spartan and midevil stuff my favorite this book is worth to me like 40 dollars a amasing book best book i ever read actually and i read a lot of books so glad i got it free cause im poor i ant got money but i cant stop the most action and spartan book i ever read next i will read mighty hammer down so amasing thank you so much for putting these books up for free i love it so much

(reviewed the day of purchase)
brody mullikin reviewed on July 6, 2011

(reviewed the day of purchase)
sarkysod1 reviewed on May 30, 2011
(no rating)
haven't read the first so a tad confused but the book is enjoyable to read

Blood and Bronze by David J. Guyton is the second installment of the Legend of Reason Series. Like its predecessor Mighty Hammer Down, Blood and Bronze is as much a literary venture into the realm of philosophy and intellectualism as it is a fantasy adventure ripe with epic storytelling. What makes this series unique among a vast sea of fantasy novels is that Guyton's characters are not your run-of-the-mill characters who slavishly serve the plot. Rather, they challenge the reader to not only share their adventures, but to also inquire into some of the deeper mysteries of life.

Blood and Bronze picks up where Mighty Hammer Down left off. The capital city of Brinn has been left in ruins after being destroyed by an invading army. Rommus Tirinius, now reborn as the new god of war, is determined to save his people from the forces conspiring to destroy them. His mortal enemy Uritis, through subterfuge and murder, has now become emperor of Medora and in the guise of the Red Mage plots to transform Medora into his own twisted version of Utopia. Even as Rommus and his allies, the beautiful, but fierce Alana Irith, the mysterious, but Immortal warrior Vohlhemoneer, and his father, the mighty Tannis, seeks to enlist the aid of those who wish to defend Medora, strange beings from another world appear to threaten the land with a dark and terrible army. It is up to Rommus and his friends to stop the enemy, all the while knowing that every action they take may result in bringing about the destruction of the very fabric of time.

As much as I enjoyed reading Mighty Hammer Down, Blood and Bronze is by far the superior tale. Guyton flexes his highly polished writing skills to great effect. The characters are more engrossing than ever and scenes are expertly crafted guiding readers effortlessly through the intense action and unfolding plot. The stakes are much higher this time for our heroes and the tension only grows with every page.

Some readers may take issue with the philosophy presented in these books. But for the open-minded reader who loves to be challenged, The Legend of Reason series offers up a compelling adventure.

I recommend this book to anyone who enjoys a vigorously told fantasy tale that challenges readers to look beyond the pale surface of their own lives, but rather to peer into the depths of the souls of heroes and villains who reflect our own reality.

You have subscribed to alerts for David J Guyton.

You have been added to David J Guyton's favorite list.

You can also sign-up to receive email notifications whenever David J Guyton releases a new book.