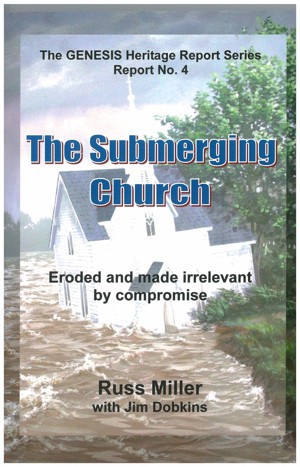 By Russ Miller
Over 85% of Christian youth stop attending church once they leave home. Why? Many pastors gloss over or skip entirely the Bible’s foundational chapters: the first eleven chapters of Genesis. Russ Miller exposes the depth to which compromises with secular opinions have embedded themselves into the Submerging Church, and he explores what can be done and how you can be part of the solution.
Available ebook formats: epub mobi pdf rtf lrf pdb html
First 20% Sample: epub mobi (Kindle) lrf more Online Reader
pdb
Price: $4.99 USD
Buy Add to Library Give as a Gift
How gifting works
Create Widget
Tags: bible church hypocrisy evolution salvation jesus christ pastor genesis creation darwinism worldview gods word compromise secular old earth emerging
About Russ Miller

After spending 18 years building a successful nationwide management recruitment firm, Russ Miller walked away from it all in the year 2000 so he could found Creation, Evolution & Science Ministries.

He’s dedicated his life to studying Creation-Evolution issues and developing CESM’s popular, yet challenging, PowerPoint programs. Russ has presented over 1,000 seminars and church service messages and appeared on international telecasts. Through thousands of radio programs he has presented scientific evidences which have challenged hundreds of thousands of Christians worldwide to confidently believe the whole Bible – word for word and cover to cover.

For much of his adult life, Russ was a Theistic Evolutionist. He believed God created, but he accepted without question that God took billions of years to get it done. But when Miller watched the video presentations of a Creationist, the accounts of Creation in the Book of Genesis suddenly made perfect sense.

The realization that there exists massive evidence for an earth that is thousands, and not billions of years old, inspired Russ to get Bible truth out to everyone he could.

You can follow Russ Miller’s appearance schedule at http://www.creationministries.org.
He also offers one of the most revealing and enjoyable one-day Christian trip experiences via his Grand Canyon Bus Tours.

His highly informative series of DVDs also are available at http://www.creationministries.org.

Reviews of The Submerging Church by Russ Miller

You have subscribed to alerts for Russ Miller.

You have been added to Russ Miller's favorite list.

You can also sign-up to receive email notifications whenever Russ Miller releases a new book.