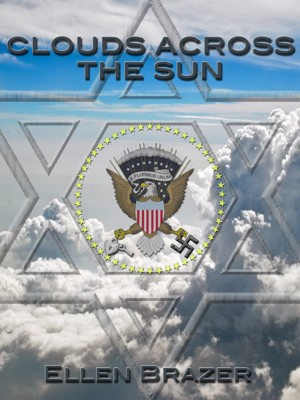 Clouds Across the Sun

Ellen Brazer lives on South Beach. Her newest book, THE WONDERING JEW, MY JOURNEY INTO JUDAISM will be published in August, 2016

Summary for The Wondering Jew: My Journey into Judaism
It all began with a promise: a promise I made to my father, a promise that led me on a journey into the heart and soul of Judaism. The result is this book, filled with intensely personal stories that helped me unlock some of the complicated teachings that make Judaism such a difficult religion to understand. The reader will learn, in a very unique way, the basics of the Jewish religion: Torah, Hebrew Bible, the holidays and the traditions. You will laugh, you will cry, you will question as you are challenged to contemplate the mysteries of Judaism: angels and reincarnation, reward and punishment, good and evil. I hope you will join me on this journey of discovery and wonder.

Summary:
Meticulously researched and controversial in scope and imagination, And So It Was Written travels to a time when a Third Temple is built and the Ark of the Covenant holding the Ten Commandments is found. The year is 132 CE, and the proclaimed Jewish Messiah, Bar Kokhba, has defeated the Roman army and rules Judea. As the Romans prepare to reclaim Israel, the book follows two sets of brothers-one Roman and one Jewish-whose friendships, hatreds, and lives intertwine. For characters you will dream about, And So It Was Written is the ultimate treat. You will smell the spices in the markets, see the blood on the battlefields, rage with the injustice of brother against brother. From triumph to defeat, this is a saga of courage, conquest, familial loyalty, honor and love-showing man at his best and his worst.

Ellen's second book, Clouds Across the Sun is listed on Amazon under the top 10 Holocaust Related Novels.

Summary: Before the end of WWII, Hitler charged a group of his most trusted and brilliant comrades with a mission--educate your progeny and then elevate them to positions of power throughout the world. Steeped in fact and impeccably researched, Clouds Across the Sun is the story of just one of these children.
From Naples, Florida, New York City, and Washington D.C., to Israel and then the killing grounds of Vilnius, Poland (Lithuania) this story is one of great romance, discovery, redemption, and enlightenment as Jotto Wells discovers her Jewish soul and unravels the intrigue surrounding a plan to take over the government of the United States.

Two of Ellen's short stories were published in a Carnegie Mellon anthology.

Her novels are inspired by the people she has befriended over the years: Holocaust Survivors, a Russian Olympic Gold medalist, a founder of a Kibbutz in Northern Israel and a renowned psychiatrist who treated the children of Survivors, a professor who worked on transcribing the Dead Sea Scrolls, rabbis and physicians. These stories, coupled with extensive research are the backbone of her fictional characters.

Ellen's goal is to have readers see into the soul and mind of the Jewish people and she hopes that reading her books will do that. Ellen likes to hear from her readers and urges you to please contact her. She is available for speaking engagements. In the past 2 years Ellen has spoken throughout the country to more than 5,000 people. She has 30 events scheduled thus far beginning in October, 2012.

Reviews of Clouds Across the Sun by Ellen Brazer

I had the honor of reading Ellen's other book, So It Was Written, and I fell in love with both her writing style and her ability to tell powerful stories with a lot of truth to them. This is a woman that does her research to make sure that her books are accurate. But it isn't just her attention to detail, but the amount of details and description she puts into the stories.

Clouds Across the Sun is just as awesome as So It Was Written. I fell in love with Jo. But it wasn't only her character, each character as they were introduced gave me an invested interest, even the ones that I disliked. Ellen knows how to use a character arc effectively. As the characters change and grow, the reader gets to see that change and development.

I really loved the underlying connections in this one too. It was such an amazing book. Ellen is a wonderful writer and I hope she releases some new books soon!

I recommend this book for those that like pieces that take a look at the past and put a new spin on what history has shown us.

'Clouds Across the Sun is a good read for something different. It can be confronting at times, but there are characters you can fall in love with. Fast paced and action packed, you won't get bored.

A great read!Wonderful story..absolutely could not put it down..Great historical novel. I highly recommend it!

A great story. This book hasit all--love, lust, greed, politcs & Nazis. I couldn't put it down. I highly recommend it.

(reviewed the day of purchase)
Orlando Rodriguez reviewed on Aug. 6, 2009

Gripping, exciting story. Has many characters and takes the reader to many settings without losing the thrill of a fast-paced narrative. Enjoyable at many levels: intense in the politics and recounting of the Holocaust, while tender and intimate in many of the personal relationships. Glad to recommend it!

Clouds Across the Sun is a novel filled with intrigue and destruction surrounded by passion love and hope. It will capture your heart and soul and be truly unforgettable. I felt like I lost such a good friend when I finished this book. What a great story! Enjoy Enjoy Enjoy

(reviewed the day of purchase)
Barbara Glicken reviewed on Aug. 4, 2009

Clouds Across the Sun is a novel full of engaging characters that capture your heart.
Add in corruption, the destructive force of lust and politics and you have a page turning read.
A wonderful blend of history and modern day life.
Barbara Glicken

(reviewed the day of purchase)
deborah weed reviewed on Aug. 4, 2009

Clouds Across the Sun is so real that you would swear you are watching a movie! This page turner has it all: passion; revenge; heartbreak and love. The best testament to a book is when you read the last page and you feel like you've lost your best friend. I felt that way! More please. . .

(reviewed the day of purchase)
Marjorie Goldberg reviewed on Aug. 4, 2009

This was one of those books that you read in a weekend. I loved the way the book switched from one character to another, keeping me intrigued. The historical aspect, the research, the raw and moving moments, and the great romance—what a great read!

(reviewed the day of purchase)
Susan Weiner reviewed on Aug. 4, 2009

A great read with a fascinating historical setting. Positively enjoyable!

You have subscribed to alerts for Ellen Brazer.

You have been added to Ellen Brazer's favorite list.

You can also sign-up to receive email notifications whenever Ellen Brazer releases a new book.